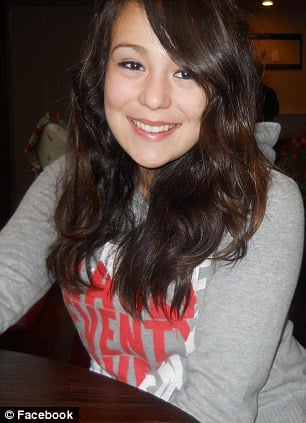 As charges are being laid on three 16 year old teens who sexually assaulted 15 year old Audrie Pott who went on to hang herself eight days after images of her assault went viral questions continue to be asked as to how her tormentors were allowed to reside at large without being brought to justice. New revelations now also go on to show how orchestrated the crime against the teen was in fact orchestrated.

‘This is not your typical juvenile crime,’

‘Right up next to murder would be an assault like this. An adult-like crime with an adult-like mentality.’

On Friday, it was revealed that Pott’s family members believe the attackers tried to destroy evidence in the case. That claim was posted on a Facebook page for a foundation set up in the girl’s name.

It didn’t provide further details on what type of evidence might have been targeted by the suspects. However, it asked any students with information to come forward.

Sheriff Smith confirmed to NBC Bay Area that her department does in fact believe it is missing a ‘critical electronic device’ possibly containing pictures of the assault that has not been turned over.

Lawyers representing the three underage suspects released a statement following Thursday’s arrests claiming that Audrie’s suicide had nothing to do with their clients.

‘Much of what has been reported over the last several days is inaccurate. Most disturbing is the attempt to link Audrey’s suicide to the specific actions of these three boys,’ read the statement signed by Eric. S. Geffon, Alan M. Lagod, Benajmin W. Williams.

Also revealed was why authorities took so long to come up with the arrest of the juveniles involved in the crime.

Telling NBC Bay Area Sheriff Laurie Smith offered that although detectives knew the identities of the suspected attackers for a long time, they had to conduct ‘dozens’ on interviews and reviews ‘electronic evidence’ to build a solid case.

Meanwhile Audrie Pott’s parents are now demanding that her tormentors be tried as adults not just for her rape, online vilification but also for the crime of manslaughter of their daughter.

‘If anybody was involved in the ruthless forwarding of this information involving an intimate body part of her, we want to make sure they’re held accountable.’

At present, Audrie Pott’s are pushing for a bill bearing their daughter’s name that would seek tougher penalties for cyber bullying.

The case like the recent hanging of Rehtaeh Parsons has once again forced wide soul searching as to how such crimes are so pervasive in society and why for that matter there is an avid permissive demeaning attitude towards young women in society.

Reflected commentators on the web:

We really do live in a very warped society when children are left alone to supervise themselves, given alcohol by adults, commit bad crimes, brag and gloat about it on social media, other viewers see it on social media, nothing is done to protect the victim, the victim is cyberbullied, still nothing is done, kills herself, ONLY THEN is something done! I am so upset about this, because I was bullied as a child, and my wife and I have our own children. Some people call me overprotective, but I just cannot help it! My heart goes out to her family. And there is definitely issues with the boys families as well. Rest in peace, Audrie.

One of the ways this sickness begins, is how we ‘genderize’ very early on..telling boys, not just “to act like a man, but telling them not to “act like a girl”. Very early, ‘girl’ becomes a ‘dirty’ word, not really something of respect, something to disconnect from, especially from any ‘girl-like’ feelings and sympathies..the death of empathy and compassion has it seeds right there. Not only boys learn this distorted message and pass it on, little girls get the message too.

Ask men, even ‘liberal’ men about their female side – the little girl inside them, and see their reaction. I often do, I don’t use ‘sensitive’, or even ‘feminine’ and sad to say, most reactions are “I don’t have one, I ‘m a guy”, or at best, “I wouldn’t put it that way”. Ask women about their male side – mostly, a very different answer… We all need to be diligent in challenging the gender code, in our media, in our surroundings, in our lives, women and men, need to be doing this every day!