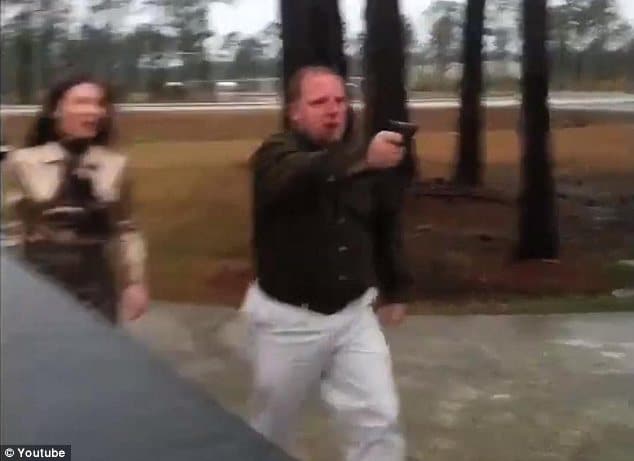 Because violence makes the world go round…

A married couple have been arrested after they pulled out a gun on two motorists during a road rage confrontation.

The incident caught on camera shows the married couple Bradley and Christy Turner alighting from their car (they were carrying a toddler in the back seat) and fighting with motorists Josh Berry and Nathan Brotzman. At the time the two ended up knocking Bradley Turner to the ground but went on to assert they only did so in self defense. It was then that Bradley Turner then took to a gun which his wife handed to him and began to shoot at Berry and Brotzman as they sought to flee the scene.

WCTI goes on to note that the confrontation took place in Newport, South Carolina on Sunday afternoon seems to have begun when the young men’s Chevrolet truck cut off the Turners’ Toyota SUV in a nearby town.

The couple followed the other drivers for 25 miles (because retribution is always a sweet thing), the victims claim, before both cars pulled up outside a house in Newport.

While the video footage mostly shows Mr Berry and Mr Brotzman attacking Mr Turner, they insist that he threw the first punch.

‘When he walked up, I just looked at him – he said a couple of words, threw a punch, and it was on like Donkey Kong,’ Mr Berry told WCTI. ‘He assaulted both of us first before we ever landed a hit. It was complete self-defence.’

Bradley Turner who has since handed himself in to deputies yesterday, and was charged with discharging a weapon into property, counts of assault by pointing a gun, going armed to the terror of the people, injury to personal property, and assault.

His 30-year-old wife was charged with two counts of assault by pointing with a gun.

Reflected Josh Berry who insists he and his friend were not responsible for the incident:

‘If you’re in that predicament, what are you going to do? You don’t know,’ he said. ‘It’s the heat of the moment. Your adrenaline is going, you’re not going to think right, and we defended ourselves.’

And then there were these reflections on the web that made me wonder as well:

So an insecure “man’s man” who starts a fight over the most simplest of things, gets in way over his head, and needs a fire arm to protect his masculinity

Apparently it is now acceptable to chase down other cars, get out of yours and approach theirs, throw a punch, then after 10 seconds of being taught a lesson by the people you attacked walk back to your car, grab a gun (while in ZERO danger) then walk back firing at the people you attacked….
You know, if some nut is chasing me in a truck because he didn’t like my driving, charging my vehicle, blowing the horn at me, cursing at me, and even shooting at me, and then pulls onto my property after me, I might jump out and try to kick his tail too. Of course, I would like to think I would call the police in the first place, but if you come on my property after me, you better be ready for a fight, or worse.