Gents ever wanted to work out whether the girl you were about to propose to was really worth the effort? Yes of course I know you have all thought about it and probably believe it when she tells you she loves you and all that but courtesy of one Russian man there is now a sure fire way to find out quick smart if she really is the one for you.

gawker: After working with a stuntman, a make-up artist, a screenwriter, and a director to stage a phony car crash, 30-year-old Alexey Bykov of Omsk told Irina Kolokov to meet him at a certain place at a certain time so she could witness the accident.

“When I arrived there were mangled cars everywhere, ambulances, smoke, and carnage,” Kolokov told Russian media. “Then when I saw Alexey covered in blood lying in the road a paramedic told me he was dead and I just broke down in tears.”

With his mission accomplished, Bykov rose from the dead and proposed to his stunned partner while drenched in “blood.” Kolokov said she contemplated killing him “for real this time,” but decided to agree to marry the lunatic instead.

Oh shucks I’m jingling in goose bumps too and thanks Alexey for scaring the bejesus out of me and yes I will now marry you cause I just realized how meaningless life will be without you. Don’t’ believe me, this is what Alexey Bykov had to say about his interesting marriage proposal feat:

“I wanted her to realise how empty her life would be without me and how life would have no meaning without me,” Bykov said. “I think it worked but I promise it’s the last time.”

The last time.Hmm, something tells me, this shit is the first of more crazy shit waiting for Irina Kolokov, then again she probably knows that anyway cause she likes her men kinky and stuff…. 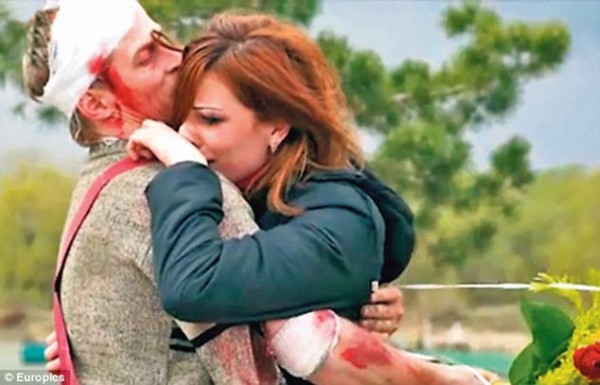