There has always been a lot of conjecture whether the Turin shroud is authentic or not, but in a new study, by Antonio Lombatti, a Church historian at the Universita Popolare in Parma, Italy, the historian is adamant that new evidence that he has come about proves once and for all that the Turin shroud is fake. Instead the historian argues that the shroud emanated from Turkey, then part of the holy land some 1300 years ago. Which is to say some 700 years after the death of Jesus Christ.

The shroud itself, which measures 14ft by 4ft depicts the back and front negative image of bearded man who has been stabbed or tortured. To date it has attracted thousands of pilgrims to the Royal Chapel of the Cathedral of St John the Baptist, Turin where it is kept.

dailymail.co.uk: In a research paper to be published later this month in the scholarly journal ‘Studi Medievali,’ Lombatti says the shroud was most likely given to a French knight as a memento from a crusade to Smyrna, Turkey in the 14th century.

‘The Turin Shroud is only one of the many burial cloths which were circulating in the Christian world during the Middle Ages. There were at least 40,’ said Lombatti, citing research by the 19th-century French historian Francois de Mely, who had studied surviving medieval documents.

‘Most of them were destroyed during the French revolution. Some had images, others had blood-like stains, and others were completely white.’

Which raises the immediate question if and other shrouds were indeed fake why were these shrouds maintained to be original? Was the desire in the medieval period so insistent that such an item exist that the perpetration of authenticity was maintained? Or perhaps on a more political level, did it serve the Church’s interests (who held power after the king) to pass the shroud as authentic and thus have the unquestioned loyalty and piety of citizens?

Based on unpublished manuscripts at the National Library of Paris, Lombatti reveals that the shroud was obtained by the French knight, Geoffroy de Charny, during a crusade to liberate the Turkish city of Smyrna from Muslim rule in 1346.

The de Charny family are known to be the first recorded owners of the shroud.

Which raises more questions? Who was the de Charny family and what was the relation to their church? What advantage was achieved by being the owners of the shroud and was a purposeful manufacturing of deceit orchestrated to achieve political proxy or was this a case that the powers that be desperately wanted to believe such a thing could exist?

What is interesting is that the Catholic Church itself has never publicly commented on the authenticity of the shroud, nevertheless it has made tiny samples available to scientists for carbon dating testing. Interestingly carbon testing carried out in 1988 determined the material to have originated between 1260-1390 AD.

Earlier this year, Cambridge art historian Thomas de Wesselow argued in his book The Sign: The Shroud of Turin and the Secret of the Resurrection, that the image on the shroud, which he said was authentic, triggered the birth of the Christian religion.

In 2011, researchers at the Italian government National Agency for New Technologies, Energy and Sustainable Economic Development said the image could not be the work of mediaeval forgers but was instead caused by a supernatural ‘flash of light’.

Either way, it’s highly improbable that the historian’s findings will have any real bearing of millions of devout followers of Christianity. Jesus Christ it seems is here to stay for a while yet… 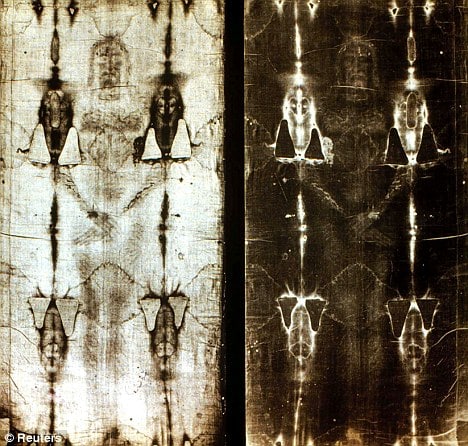