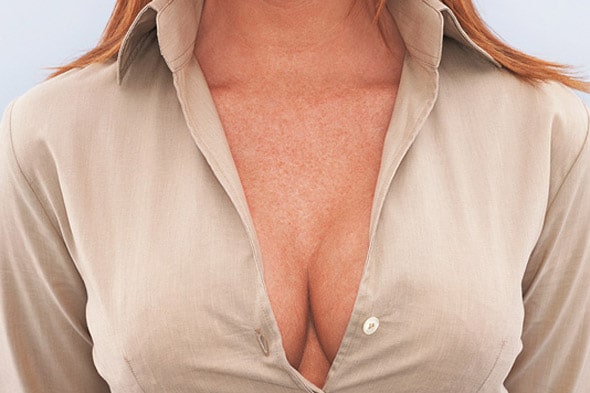 Southwest airlines would like all you ladies to button up to the very top please.

Here’s a icky situation making the rounds this afternoon. It involves the case of a woman who is only being identified as ‘Avital’ who found herself being denied boarding on a Southwest airlines flight because her uhm, ahem,well her cleavage was too inappropriate. Which strikes me as of course short of ludicrous unless big breasted woman are suddenly no longer tolerated.

Boarding the plane the woman was told she would not be allowed to stay on the flight unless she covered up her cleavage. Of course so traumatized was she by the experience she naturally reached out to gossip rag jezebel who of course went to work with ‘Avital’s story:

jezebel: Although Avital was told she wouldn’t be able to fly if she didn’t button up her flannel shirt, she bravely bared her breasts all the way onto the plane. “I didn’t want to let the representative’s Big Feelings about my breasts change the way I intended to board my flight,” she explained. “And lo and behold, the plane didn’t fall out of the sky…my cleavage did not interfere with the plane’s ability to function properly.” Imagine that!

To my knowledge the sky has not fallen down and collapsed on me when I have been in the presence of big breasted women with what some would term as inappropriate cleavage. Then again now that Southwest have warned me of such possibilities I will of course now endeavor to be extra vigilant in my daily affairs. Thank you Southwest for me setting me straight.

And here’s where my head gets woozy cause them bixches at jezebel are so damn clever:

Is it really inappropriate for a self-described large-chested woman to wear a non-constricting sundress on a 100-degree day? More to the point: is it really the airline’s responsibility to dictate what is and isn’t appropriate apparel? “To add insult to injury, the guy sitting in front of me on the plane was wearing a shirt with an actual Trojan condom embedded behind a clear plastic applique and had no trouble getting on his flight,” Avital added. “Slut shaming, pure and simple.” We’d have to agree.

God. Slut shaming too? Why can’t we just adore flat chested, big chested and even Trojan condom wearing boneheads all round. Surely it would make flying a much more pleasant experience. Unless of course you don’t like gawking at inappropriate breasts that might cause you to prematurely ejaculate gesticulate?

Southwest spokesperson Christi McNeill told us that the company offered Avital an apology and a refund “as a gesture of goodwill,” but that their Contract of Carriage allows them to refuse to transport a customer whose clothing is lewd, obscene, or patently offensive. “As a Company that promotes a casual and family-focused atmosphere onboard our aircraft and in our airports, we simply ask that our Customers use good judgment and exercise discretion in deference to other Customers who depend on us to provide a comfortable travel experience.”

Never mind, next time I catch a Southwest flight, I’m gonna have myself a boner and if that damn flight attendant makes me get off the plane I am going to have myself a rigid fit and of course write to jezebel about it.

If only the world could calm down and accept that things and body parts don’t always make sense. Blah!

How the times have changed. See Southwest video circa 1972.