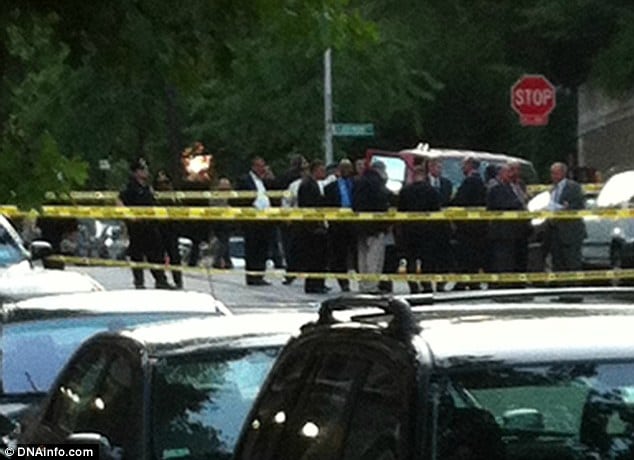 Reports are surfacing that three men, natives of nearby Washington heights  were brazenly executed on the periphery of Columbia University early yesterday evening. The motive at present is thought to be the result of a drug deal gone bad.

Two of the victims (all three victims are thought to have been executed at the same time in their $88 000 BMW car) were found slumped in the front seat, blood running down their jeans and white t shirts whilst a third passenger was shot in the temple in the back. The three dead men came to the attention of a passerby shortly after 6.30pm yesterday evening when they chose to peer inside the tinted windows.

At present the victims have been identified as follows according to the nypost:

Interestingly the Post’s readers were quite dismissive of the deaths and felt that the ‘scumbag parasites who would not be missed deserved as much.’

The car itself was found parked near the intersection of W. 122nd Street and Claremont Avenue, between the Union Theological Seminary and Riverside Church

dna: It was not immediately clear where the triple shooting occurred or exactly when the men were killed, but officials said no gunshot sounds had been reported. The victims’ identities were not immediately released.

“We believe the car had not been parked there for an extended amount of time, perhaps an hour or so,” said Browne, who had earlier mentioned that early reports said the car’s hood was still warm when police arrived.

“There were no reports of shots fired, and no 911 calls,” he added.

Did the killing take place at undisclosed location away from the grounds, out of ear shot? Or was this a professional killing that involved a silencer? Or even worse could the two front passengers been the victim of the back passenger before pulling the gun on himself? Of note though is how no bullets holes were found in the car’s windows or doors hinting at a professional marksman, which gives further credence to the notion that the shooting was the result of a drug deal gone bad.

Of note when investigators began piecing evidence was the discovery that the automobile’s license plates showed that the registration was temporary, the type often associated with a new vehicle purchase. Could the identity of the vehicle help in bringing closer the killer forward?

At present it has been confirmed that those shot were not affiliated with the nearby university.

So much for quaint neighborhoods that have a history of opera music wafting out of open corridors and the aroma of the unsavory just up the road where so much drug crime over the years has taken place.