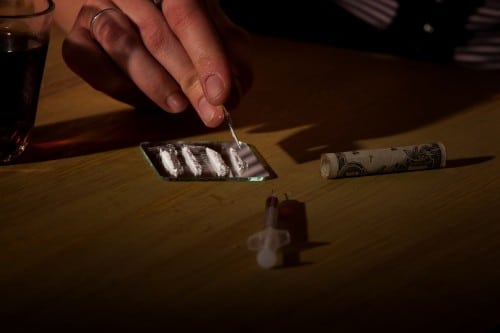 Hmm, here comes an interesting story courtesy of one Philadelphia police station. It all began when cops busted local dealer Ray Woods with some blunt in his car after having pulled Woods over for a broken rear light (not a very good way of deflecting attention to oneself when you’re busy delivering the good shit all day long, oh well….).

At the time, the arresting officer Christopher Eiserman noticed a rather large bulge by the are of Mr Woods genitalia which led him to asking if Mr Woods happened to be hiding any of the good shit down there, to which Mr Woods nonchalantly replied- ‘no.’

As it turned out though when Mr Woods and his hosts arrived at the local booking station, Mr Woods was asked once again about the rather prolonged bulge in his front area. At this point officers then had Mr Woods draw down his yaks only to find a very special surprise waiting for them. Yes, 89 bags of cokey and dopey slinging off his shlonger.

But kids, we haven’t even arrived at the best part yet. When Officer Christopher Eiserman went to remove said contraband, Woods proceeded to pee all over himself and by extension all over Officer Eisenman’s hands. Which if you ask me is just a clever way of ‘dissolving all the evidence.’

Asked whether Mr Woods will also be coping a booking for peeing, Officer Eisenman gushed: “I don’t think he did it intentionally,” he said. “I think he was nervous, he knew the jig was up.”

Never mind, when Ray Woods eventually gets out of prison he’ll have a new book on the proper etiquette of drug dealing 101 ready to go….