Genesis Reyes, a four-year-old from Long Island, NY who lost her hair due to cancer treatment, knew this feeling first hand and expressed to her loved ones that after she went bald, she no longer felt like a princess.

Luckily enough for this young girl, a parent whose child was also a patient at the same hospital had close ties to the CEO at Mattel, and was able to have a bald doll made just for Genesis.

The next step in the process of getting bald Barbies out on the market occurred when Jane Bingham and Beckie Sypin heard news of Genesis’s story. These two took to Facebook to create a page, Beautiful and Bald Barbie! Let’s see if you can get it made, that would petition for Mattel to manufacture a doll specially designed to relate to children who have suffered hair loss.

The group also implemented a petition to get a hairless GI Joe doll, so they can reach out to young boys who also suffer diseases that lead to hair loss.

Before long the page gained over 150,000 “Likes” and Mattel took notice.

In reaction, the toy company will create a hairless “friend of Barbie” that will be distributed to children’s hospitals and treatment centers.

Reports the Daily Mail: “Mattel has made the ‘decision not to sell these dolls at retail stores and profit from them, but rather more directly and immediately get these into the hands of children who can most benefit from a play experience with these dolls’.

The company also plans to donate some of the dolls to National Alopecia Areata Foundation and CureSearch for Children’s Cancer.”

Alan Hilowitz, Mattel Company spokesman has stated that there will be “hats, scarves and other fashion accessories to provide girls with a traditional fashion play experience. For those girls who choose, the wigs and head coverings can be interchanged or completely removed.” 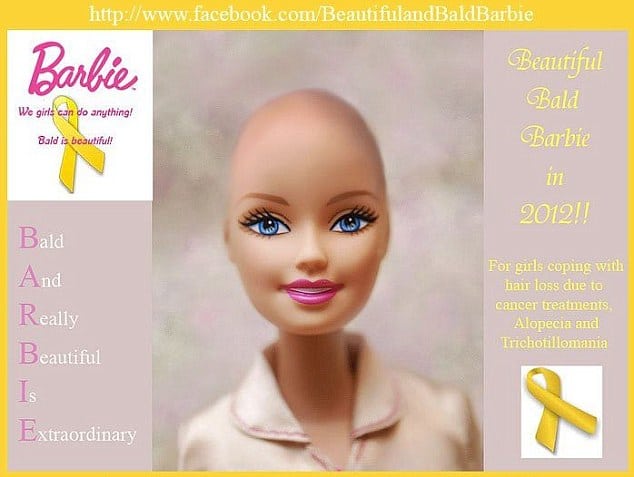 But not everyone is happy.

Now although this doll will not be a Barbie, but a “friend of Barbie”, and will not be manufactured for sales but as a philanthropic venture, gaining the attention of Mattel in such a large way through Facebook was definitely a step in the right direction.

So now the next step in this process is to get the hairless Mattel doll into stores, because that is truly where the company allots importance.

Activists need to prove that this is not an issue that can be swatted away or sidestepped by philanthropy; it is a movement that represents young children and adults, both the sick and healthy.

And maybe, just maybe, getting a bunch more “likes”  will propel Mattel in exactly the right direction. After all, sometimes we just need the customers to show us the way.