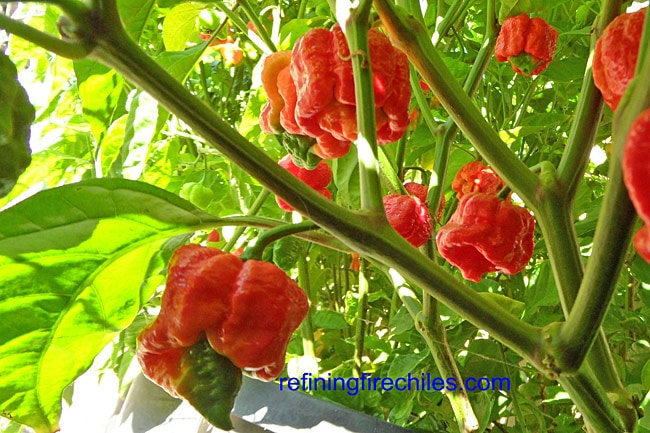 In the ever maddening sweep to claim the hottest pepper, pepper growers of late have been experimenting as to how get your pepper hawter than ever. The rewards? The booming market for hot foods and spices and not to mention the ammunitions departments who have now (like India’s army) of incorporating juices to create spice tear gas like grenades said to leave those in the path barely able to breathe.

‘The more stress on a plant-hotter temperatures or less water and you could result in a very hot fruit.’

In fact so hot have some peppers become, that picking them up literally requires latex gloves, of course don’t be surprised if your fingers start flaring up as it’s also been known for the new breed of peppers to be so hot that capsaicin juices can now seep through one’s gloves.

Which brings us to this year’s nominated hottest pepper: the moruga scorpion. Even the name is hot. But then again the fruit isn’t for the feint of heart, assuming of course you can’t resist the sudden rush of endorphins that come with eating these guys whole in one’s mouth.

Offers another researcher from the school:

‘People actually get a crack-like rush. I know the people who will eat the hottest stuff to get this rush, but they’ve got to go through the pain. The blood flow increases and the endorphins start flowing. Their faces turn red, the sweat starts rolling, their eyes and noses water and there’s a fiery sensation that spreads across their tongues and down their throats.’

Which reminds this author next time he senses the need to get off he’ll simply put the good shit away and pop a moruga scorpion into my mouth and then quite literally jump for pain and of course joy too.

And for your amusement watch how one hawt bixch nearly falls off his stool as he takes the plunge.