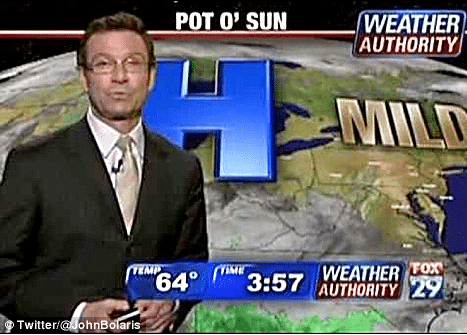 Something isn’t making sense in corporate America. Welcome to the continued portrayal of men as booze hounds looking to get laid at the expense of politically correct behavior.

The dailymail is reporting today that Philadelphia FOX weatherman John Bolaris is being fired from his position as a TV weatherman pursuant to an interview with Playboy magazine which negatively portrayed him as a man behaving irresponsibly in order to get laid, this after a grand jury indicted two women and an international criminal gang that they worked for in collusion to defraud and steal his funds on top of drugging him.

The adventure all began in March of 2010 whilst vacationing in Miami he attended a bar where he came across two Eastern European women who seduced him.

dailymail.co.uk: He told the Daily News that he woke up the next morning in a taxi, unable to recall what had happened the night before.

When he confronted the women that day, they took him out again, and, for a second time, he woke up unable to remember what happened.

Unable to remember what happened? Because he was having too much of a good time? Because Mr Bolaris is a run away alcoholic? Or because he was drugged by two scheming women who taking advantage of their looks and ability to seduce the ill advised Mr Bolaris on a hell bent trip to ‘looser-ville?’

Mr Bolaris knew he had been drugged, but didn’t realize the extent until days later, when his credit card company called him to report he had charged more than $43,000 on alcohol, expensive food and an absurd painting of a woman’s head.

He later testified about the ordeal before a grand jury, which led to the arrest of 17 members of an Eastern European crime ring.

Of course you would think that would be the end of the matter, the crime gang gets punished and Mr Bolaris going forward learns a thing or two about certain women who prey on men. But it was only the beginning….

But the trouble was far from over, after he sat down with Playboy magazine for an interview about the ‘Bar Girls’ scam last year.

Sounds innocent to me. Right?

The interview presented Mr Bolaris as an out-of-town boozehound who followed the women because he was looking to ‘get laid’.

He also mentioned to Playboy that one of his favourite pastimes was to ‘watch football naked with my lady and a bottle of wine.’

He added: ‘Then, the next morning, make breakfast for her, turkey Hot Pockets with egg whites in the microwave’.

Likes to watch football naked with a lady and a bottle of wine? Gentleman can we all raise our hands immediately to doting on the same desire/past time? Are we to genuinely believe that a man should be punished for express the fact he enjoys the company of women? Let’s also not forget this is Playboy where pretty much everything that is discussed is about naked women, and in racy terms, so we can hardly fault the weatherman (yes even weathermen have libido’s -shock/horror!) for disclosing in the interview how he likes to spend his down time.

Of course if I was his personal advisor I would have whispered in his ear ‘no comment,’ but really this is a new low towards attitudes towards men and them being perceived as irresponsible hounds with raging libido’s who deserve all the muck that gets thrown at them, even drugging and extortion.