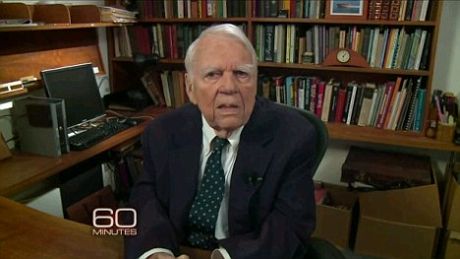 Who will make us laugh and cry now?

It’s been reported this morning that veteran journalist,most famous for his seething commentaries on the absurdity of life on the bulwark show 60 minutes has passed away.

It is said he recently entered hospital for an undisclosed surgery, developed complications which he was unable to recover from before passing away Friday evening.

Mr Rooney’s death comes a month after retiring from the show, 60 minutes that had made him a world wide sensation. In all he had appeared in 1097 episodes, having first aired on the show on July 2, 1987 even though he had been brought on as early as 1978 as one of the show’s producers.

A lovable curmudgeon Mr Rooney would rant from anything from the inconveniences of cell phones, why banks ought to have important sounding names and why he still wore his old clothes even after someone had bought him a new tie. He also liked to tell viewers just cause they figured he was famous it would be best should they run into him at a restaurant to ‘just let me eat my food in silence!’

‘I obviously have a knack for getting on paper what a lot of people have thought and didn’t realize they thought,’ Rooney once said. ‘And they say, ‘Hey, yeah!’ And they like that.’

But it wasn’t always smooth sailing. The journalist often found himself upsetting various folks (something that a journalist ought to try doing in their lifetime instead of being yes men to the establishment, but that’s just this journalist expressing a point of view that you may or may agree with…). Like the one time he started railing about how uncomfortable modern air traveling had become:

‘Let’s make a statement to the airlines just to get their attention,’ he said. ‘We’ll pick a week next year and we’ll all agree not to go anywhere for seven days.’

On his last appearance on 60 minutes just over a month ago Mr Rooney had this to say:

He said he probably hadn’t said anything on ’60 Minutes’ that most of his viewers didn’t already know or hadn’t thought. ‘That’s what a writer does,’ he said. ‘A writer’s job is to tell the truth.’

But telling the truth can be a very subjective experience and there have been many groups outraged by what Mr Rooney had to say from time to time.

Gay rights groups were mad, during the AIDS epidemic, when Rooney mentioned homosexual unions in saying ‘many of the ills which kill us are self-induced.’

At least no one can’t argue that Mr Rooney wasn’t stirring the pot and forcing a dialogue as to what anything could mean, the domain of any self respecting writer.

He was one of television’s few voices to strongly oppose the war in Iraq after the George W. Bush administration launched it in 2002. After the fall of Baghdad in April 2003, he said he was chastened by its quick fall but didn’t regret his ’60 Minutes’ commentaries.

‘I’m in a position of feeling secure enough so that I can say what I think is right and if so many people think it’s wrong that I get fired, well, I’ve got enough to eat,’ Rooney said at the time.

‘There have been many curmudgeons on television over its long history,’ Safer said affectionately. ‘None has been so long serving in that role as Mr. Rooney.’

Let’s hope with the passing of Mr Rooney the legacy of the outspoken journalist still remains- after all there’s nothing that can invigorate readers more than finding out about why new ties just don’t compare to the memories of old ones or why for that matter no matter how famous a journalist or blogger becomes they should only really be famous because of their ability to touch a nerve in the reader’s mind even if it’s about why banks should have important sounding names or why sometimes those same banks are impeding in the wider distribution of wealth and opportunity- something that most of us still believe in- something that Mr Rooney also believed in and hopefully has inspired a few up and coming journalists to keep rallying the course for. But who can really be sure with the current fracas in media today.