A dating site designed for extra marital affairs, Ashley Madison, has struck outrage after having released not one but two back to back disparaging billboard advertisements that accordingly to the model unwittingly depicted (her image was sold to stock files years back) in the campaign champions the view that overweight women are not and can not (to) be loved.

huffpo: The dating site, which seeks to connect married or “attached” individuals for affairs, released an ad last week stating, “Did your wife SCARE you last night?” with a photo of an overweight woman lounging sexily in lingerie.

The logic, we presume: with a wife that frighteningly fat, the only solution is to seek sex elsewhere. With married folks on Ashley Madison, specifically.

The ad’s implicit motto is that men will never love a woman if her appearance’s don’t abide by the media constructed themes of petite proportions that are often air brushed day after day on countless covers-a situation that sets up a view that a woman is only worth adulation assuming she looks the part and on the flip side a man is only worthy of a woman’s adulation as long as he has wealth and power, something we’re meant to assume Ashley Madison has a plethora of in their dossier of willing married men.

What makes the advertisement particularly deceiving is that married men and women aren’t necessarily looking for the same things that single people are looking for. After all they’re many women who have loving successful husband who can’t resist the allure of artist types or young handsome bucks, something that they would be hard pressed to go for as single women as  these types of men hardly suggest stability and financial prowess,something that many women seek in a solid relationship.

On the flip side there are many men who are married to women who don’t look like Victoria’s secrets model but nurture their husbands emotionally and provide him the type of support and encouragement that they would be hard pressed to achieve from an emaciated model looking to build her career. Nevertheless Ashley Madison insists that this is what men want and anything short of this is a disappointment. In essence reducing a woman’s value to her capability to replicate the appearance of a size 2 model lest her be expendable otherwise.

Writes the model, who goes solely by the name Jacqueline, and who runs her own website, www.juicyjackie.com on jezebel:

‘There is an enormous problem in this world in regards to female body shaming, and not solely in regard to fat women, but all women. A size 2 woman who sees this ad sees the message: “If I don’t stay small, he will cheat.”

She then goes on to express her disgust that outlets like Ashley Madison could even dare use body shaming to promote infidelity (which is what brings Ashley Madison their livelihood):

‘I find the very idea that there exists a business based solely around the facilitation of infidelity appalling. The fact that they are now suggesting that a person’s partner not fitting their ideal body size/shape, entitles that person to ‘shop around’ is disgusting,’ she writes.

But if you think Ashley Madison were content to play at the above themes once and then shirk in embarrassment they decided to come out with a second campaign a week later (see below). 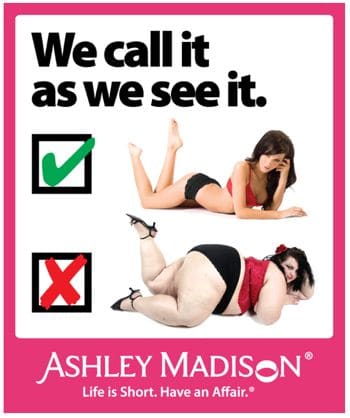 huffpo: Ashley Madison have come out with a second ad this time seeking to reduce the argument even further to this simple logic: skinny = good, fat = bad. The same image of