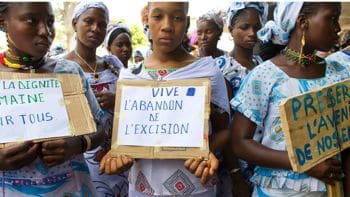 Perceptions are starting to change and now some women are taking stands on what constitutes a woman’s femininity.

Here’s a startling fact: Across the whole of Africa, upwards of 92 million girls and women have had their clitoris cut off, with nothing to dull the pain. Talk about dignity.

Considered by many on the continent a rite of passage that makes a woman more suitable for marriage (yes we must remember a woman shouldn’t be able to revel in her sexuality or feel ecstatic pleasure, that is the pure domain of men) the practice has until recently been a reluctant acceptance of the way of life for most women. Until now that is.

Spearheading a growing movement within the continent to thwart the practice of genital mutilation is Senegal, as more awareness of the dangers of the practice is creating an increasing consensus to put a stop to such endeavors. Part of the trick it seems is unlike Western counterparts who deride the act as barbaric is to acknowledge its traditional legacy, whilst being careful at the same time to avoid labeling the practice as barbaric.

In fact it may come as a surprise to know that the Senegalese government officially put an end to genital cutting over a decade ago, but with a land overwhelmed with villages with its own hierarchies such decrees have largely been ignored.

“Before you would never even dare to discuss this,” said Mamadou Dia, governor of the Kolda region where this village is located. “It was taboo. Now you have thousands of people coming to abandon it.”

It seems part of the strategy in thwarting genital mutilation is to reach out to village elders and chieftains and convince them no religious requirements exist for cutting.

Like the Chinese pursuit of foot binding, which was said to constrict the size of a woman’s feet and thus make her socially more appealing to other men, (once again pleasing men is the name of the game) what eventually led to the dropping of this standard of desirability on behalf of a woman (which parents unwittingly pursued in order to ensure their child’s respect within the village and the interest of a well to do suitor) was the collective pledge of villagers that the practice carried it with serious physical disfigurement and in actuality hurt women. Such it seems has been the course of understanding in Senegalese villages.

Which raises the question- can we now begin to perceive a change in attitude towards female genital mutilation as a proxy of wider acceptance of a woman’s rights and equality in the community and more importantly as more young people begin to cede this view, will the elders also cede to it and give their blessing as is customary in pan African continental as their blessing has always carried so much weight?