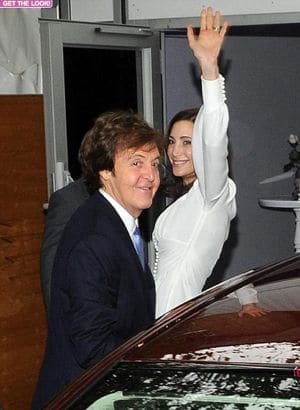 One presupposes there’s nothing better than the giddy feeling of watching your classic rock idol tying the knot in a fairly tale wedding on a Sunday afternoon, which is exactly what happened this afternoon in North London, UK when Sir Paul McCartney (no stranger to marital mishappenings) wed his long time girlfriend, 51 year old American trucking heiress Nancy Shevell.

After an acrimonious public break up with Heather Mills in 2007 (which one can only imagines dampens the heart a smidgen) Sir Paul had the good fortune (let’s admit it…) of meeting the well heeled and gracious Nancy Shevell out in the Hamptons, Long Island- an enclave for those who know it, is the epicenter of aspirational New Yorker’s in the summer months.

After much speculation in the press about their low profile relationship (one supposes one learns a few lessons as they gracefully age…) the couple who it is said are much more suited in temperament and of course come with their own fortunes as opposed to Sir Paul’s previous failed marriage to Ms Mills(which should go a long way in allaying the formerly dissed Beatle’s frontman’s fears of being fleeced for his dollars) wed this afternoon in the chic borough of St Johns, North London, where Sir Paul resides and it is said where Nancy Shevell will also now reside. 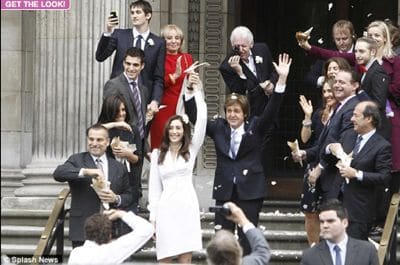 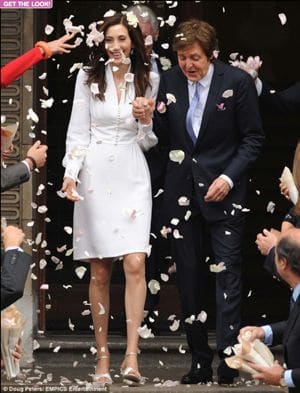 As the couple descended into public view with rose petals being parlayed at them, one could hardly mask the beaming joy of the couple and that of the well wishers who came along to partake in some much needed good cheer and revelry given the recent negative news that last came out of North London with the sudden death of vocal temptress Amy Winehouse.

With only 30 guests at the steps of Marylebone Register the low key wedding underscores Sir Paul and his new wife’s continued desire to remain out of the limelight (then again who needs to be in the limelight when you have already secured vast financial assets, just ask any legitimate well heeled socialite thank you very much!) and their life going forward very much a private affair.

Yet true to form, Sir Paul is said to be planning to perform a yet as of now released new song for his new bride this evening in London as part of the evening’s reception. Perhaps it’s no coincidence that Sir Paul chose to celebrate this momentous day with the world on the celebration of what would have been the 71st birthday of former band member,the eponymous John Lennon.