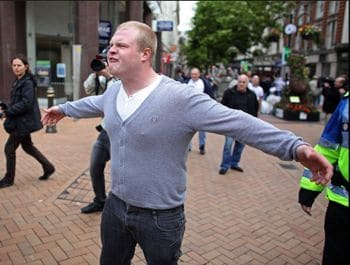 Has the British government crossed the line in dealing with one’s group civil liberties?

To be sure it’s a tenuous situation which might be why the British government has decided to give the police special power that will allow it to prohibit far right wing groups from marching through 5 London boroughs for a period of up to 30 days. Already the mandate has incurred the wrath of civil liberties groups that the government is over stepping its mark in denying even groups that it may not personally agree with their right to freedom of expression. Concerns have also been raised that the action has also gives police extraordinary powers, something that any ordinary British bystander on any street can attest to…

In its defense, Scotland Yard has argued it was compelled to issue the ban over fears of violence and disorder that it believes  one right wing group (others would say concerned citizens) the anti Muslim group, the English Defense League has claimed to have made earlier this month. On the surface such an assertion, whether true or not may sound reasonable to preempt violence yet if one takes the greater view that a public authority can decree what it deems to be potentially violent, unsavory, unpalatable then one can only begin to imagine the potential harm or abuse of such a law could create. In some way, like the US, such ordinances often made for the purported sake of safety usually has the disingenuous effect of preempting logical discussions, and perversely increasing tensions that such legislations purport to address.

According to one activist, Richard Seymour, the ban speaks of greater motives:

“Once the ban is passed, that does not necessarily mean to say the march is not going to happen, it just means the police just have more powers,” says Seymour. “And that is a part of the wider problem. If you are restricted to a static demonstration, the police have a right to pen you in and arrest you very easily for relatively small offences or non-offences.”

Which is another way of saying not bad work if you can get it- assuming you’re in the business of clamping on the public’s freedom to march (at present the ordinance doesn’t limit the public’s ability to congregate, but one can only wonder when that caveat slides in- for our safety of course…), express an opinion or even force an agenda, despite how unpalatable that agenda or grievance may be to a possible offended party.

Time will tell how these laws will be applied, but for now it seems the pretense of good intentions may really be a mask for some less than honorable dispositions in the British governments ever increasing control of the public at large. So much for your freedom…