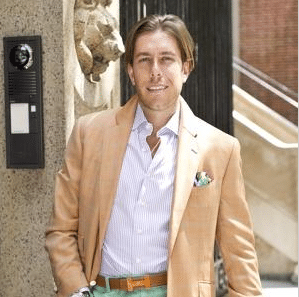 Last time my lips touched the golden name of Justin Ross Lee it was when I received a cache of images in my inbox of hunky Justin frolicking with a younger than 18 (I know kids, I’m blushing too) Lauren Amanda something, a part time model and aspiring media whore student.

But this kids is to be sure much much better, a real scandal, a real pealing of layers, a real expose of a derelict who can no longer hide behind the veneer of photo ops, headshots, smily shots, massive credit card debts and the inconvenient truth that the brand called ‘Justin Ross Plug my name to batshit Lee,’ is now officially an extinct business. Liquiditation has officially begun. But first an eulogy to our mate Justin. How did the buggery really all begin…?Put on your black suit and follow through the lush vast yards of make believe….

nytrashpost:A shameless New York self-promoter and velvet-rope gadfly — who snootily brags about copping freebies while flying only first class and sporting custom-made clothes — is flat broke, according to court papers.

In bankruptcy documents filed in Manhattan last month, social hustler Justin Ross Lee, who regularly boasts about his luxe lifestyle to his 5,000 Facebook fans, claimed that his aptly named “Pretentious Pockets’’ silk-pocket-square business is a dismal failure, raking in just $12,250 to date.

Uh-oh! Flat broke. Only $125 a year? Wow Justin that’s not doing too good. But don’t worry Justin, I only eked out an extra $42 above what you did, so you oughtn’t feel to bad about yourself. Heck, I bet a lot of your poseur pals didn’t even bank more than $100 (and no selling your blood on the weekends doesn’t count) – this being an official free for all recession.

And that’s left Lee with a measly $100 in the bank, nearly $160,000 in debt and unable to cover the rent on his $2,700-a-month apartment in Murray Hill’s white-glove Anthem building, court documents say.

Damn’ Justin, you mean you were faking it all along? Living the hog off other people’s money? And what are you going to do to pay it off? Surely you intend to pay it off Justin. Right? I could never imagine you skirting your responsibilities? Not you.

But then again now that you’ve declared bankruptcy this is another debt you get to avoid having to deal with. I know I’m smirking too. High five here!!

But then Justin who is down on his ass has this to offer us, because frankly there’s nothing but a bottle of moonshine and pipe dreams separating Justin and the soup kitchen (don’t stress it Justin, the baglady makes sure to always saves me the best seat in the house for fallen trust fund stars scam artists, so I don’t see how she’ll be able to resist you) where he will soon be taking his afternoon meals…

“There are four things that I refuse to pay for in this city — parking, publicity and p – – – y. The fourth thing is alcohol,” Lee, 30, haughtily told The Post earlier this month.

“Whenever I reach a door or a rope, there is no speculation that I’m not going to get in. The only part I hear is the metal part of that red rope hitting the ground,’’ he said.

And just in case you fully fathom the brunt of Jusitn’s social standing and phoniness there’s this:

paying for things isn’t in Lee’s playbook — he has bragged that he mooches much of his lavish, jet-setting lifestyle with comped hotels, booze and airfare.

According to the court papers, Lee, who lists his occupation as “haberdasher,” claimed that he takes in just $3,250 a month from Pretentious Pockets, whose pocket squares start at $58 a pop.

Oh c’mon, give the guy a break damn’ it!! What’s a bit of exaggeration amongst friends?

After rent, utilities and other expenses — including $50 a month for dry cleaning — Lee is in the hole by $1,000 a month, his papers claim.

But Lee apparently has had no problem financing his high-living ways.

His Facebook page contains hundreds of pictures of him lounging in first-class and aboard private airplanes and partying in the Hamptons, LA, and Europe, surrounded by a bevy of beauties.

A bevy of beauties who will no longer be there…

Lee, who claims he’s pitching a reality TV show about his lifestyle, launched his Facebook page to market himself because he believes he’s a “brand’’ people will buy.

A brand one is willing to buy, or a phony one is best advised  to lightly smile at whilst passing the don’t jump over the bridge  sign?

Isn’t it amazing that the very people whom you looked up to and always judged as the pillar of good society so often end up being the dogs of society?

Let’s hope Justin doesn’t accidentally lose that necklace anytime soon, something tells me his going to be using it very soon to buy a one way ticket to the North Pole.

Who is the 16 yr old Lauren Amanda sitting on JustinRoss Lee’s lap?