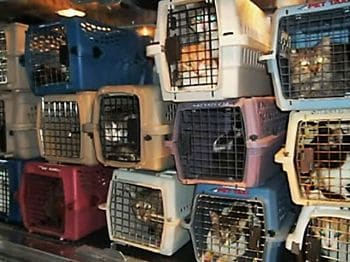 Have you ever visited someone and wondered to yourself how they manage to accommodate a treasure trove of pets? Yet if a pet is man’s way of seeking and attaining unconditional love then we are wanton to accept an individual’s desire to be surrounded by many pets. But what are we to think when some of those individual’s like, recently deceased 14 year old Matthew Degner lived amongst more than 200 animals?

When Matthew Degner’s mother called authorities in lieu of her unresponsive son, little did authorities expect to find what befell them.

Over 200 animals living in squalid conditions, with feces everywhere, bugs and no running water. So bad were conditions that local authorities have reckoned the house counted for one of the worst conditions they had ever come across- if you can wrap your mind around that.

It is also said that Ms Degner’s other children were found to be malnourished, also ill and along with their mentally retarded brother, Matthew had never attended school. How authorities could let this to pass is a question of grave concern to this author, but perhaps in the state of Illinois no mandate exists that forces children to attend school.

Ultimately Michael succumbed to bronchopneumonia later at the hospital, which raises the question did Michael’s condition come about as a result of living in an overabundant house of animals and stench or was it an illness independent of it.

The animals for their part,some which had been caged, others not, didn’t fare much better, with many being extremely malnourished, hungry, and thirsty.

All of which raises some questions- what was Michael Degner’s mother thinking, was she thinking, was this a cruel experiment or a misguided notion that filling a house full of animals that she could provide her children boundless love and affection, as pets are wanton to do, that she was herself ultimately unable to give…