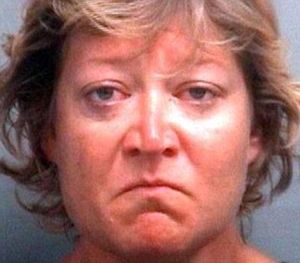 What possessed one woman to torment and torture her cancer stricken mother to the point of death?

Authorities today are holding a 38 year old Florida resident (yes always Florida) Alicia Henderson in custody after it was accused that over the course of 2 days Miss Henderson repeatedly beat  and tortured her mother who at the time was diagnosed with stage 4 cancer and Alzheimer’s disease. Taken to hospital Reba Little, Ms Henderon’s mother would soon subsequently die, her death doctors argued triggered by massive head trauma.

What makes this case particularly beguiling is the degree of torture and punishment that Reba Little suffered at the hands of her daughter.

dailymail.co.uk: Charlotte Lovell claimed her sister moved into her mother’s West Palm Beach home, in February, saying she wanted to help take care of her.

Lovell said her sister began her alleged abuse by hitting their mother between five and ten times about the face and head.

She also took away Little’s clothes and told her she had to ‘earn them back,’ Ms Lovell said.

On the surface it appears the torture that Ms Henderson afflicted on her daughter was certainly spiteful and mean spirited but one is left to wonder if on some level the daughter was recreating some past punishment that her mother may have meted out to her daughter when she was growing up?

The elderly woman would be locked in the bathroom and her daughter would only feed her candy and popcorn.

In one instance, Lovell said, Henderson kicked their mother in the back and hit her ‘hard in the head’ because she had fallen over and spilled a cup of water.

It’s as if the daughter had waited all her life to exact a type of punishment and torture that had somehow haunted her and was never able to get over, now using her mother’s illness and her inability to defend herself and one wonders her fast approaching death from the incidence of stage 4 cancer to finally deal.

Police reports articulate that Ms Henderson began her abuse of her mother just 2 days after she moved in, back in February with her and her sister (suggesting premeditation) and continued  until her sister finally fled and had their mother taken to hospital for injuries from which she would later die from at the hands of her sister.

When Palm Beach County Fire Rescue workers arrived at the home, Little was taken to Palms West Hospital in Loxahatchee, where she died a few weeks later.

Henderson was arrested over the weekend and charged with manslaughter and domestic violence.

How bizarre that a daughter held such depth of hostility towards her mother, from when exactly is anyone’s guess but one has to wonder if the death of her mother went the distance in dealing with the latent hostility and hurt she felt towards her? Or if it in fact did very little to diminish what this author speculates is some latent childhood wound that refused to heal itself. Or was this simply the case of abject cruelty precedented on no particular event at all?

Such it seems are the unresolved perverse affairs of certain families…