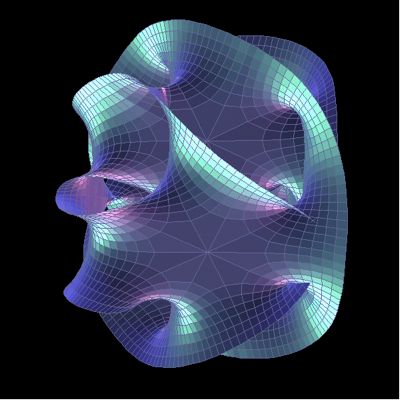 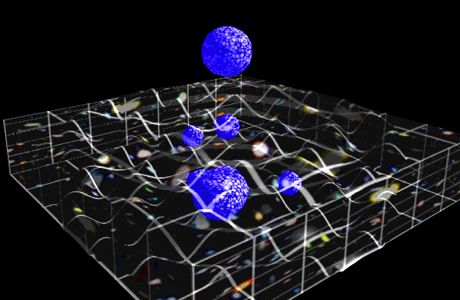 “What are those nerds doing over there?” asks Jesmeen, a local teenager who just doesn’t get it. Every Wednesday morning beach goers at Smith Point on Fire Island roll their eyes in wonder at a very unlikely sight.

Under a gazebo right on the shore, fifty theoretical physicists from all over the world gather for the weekly beach seminar on String Theory. The sight is odd at first. A herd of hardly handsome guys in their swim trunks, most pale as ghosts, covered in sunscreen protection 40, carefully listening to one of their peers who’s writing obscure formulas on a whiteboard (while getting fried in the sun).

String Theory, formerly known as the Theory of Everything, is the crowning achievement of decades of research in physics and mathematics. It describes the very fabric of space and time, how we can tear it apart, create black holes and wormholes out of it. Unfortunately for the beach goers and the cops that station at the corner, the theory that describes quantum gravity translates into entertaining formulas and diagrams, that you will never understand unless you are one of the adepts.

Did I mention that among the large physics crowd you can find three women, too. Yes, ladyfriends, if you are into nerds, you should take a theoretical physics class! The ratio men to women is close to infinite. 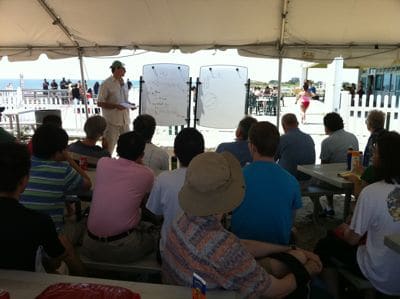 Behind the whiteboard and the speaker, an endless procession of suntanned teenagers in hot Brazilian bikinis walk by, displaying a wide range of reactions at the odd sight. Some burst out laughing with their friends. Some stare at the formulas on the blackboard, then go back to their ice creams. Local king-of-the-beach dudes figured it all out: they just drop a pitiful look at the scientists, flexing their muscles to impress their girlfriends.

Every so often, the physics crowd gets distracted and all eyes synchronize to follow the occasional catwalk strolling back and forth right behind the whiteboard. As the frequency of catwalks increases, you might wonder whether the local beauties are just teasing the physicists to see who can draw more eyes away from the lecture…

Nerd is the new black!

But the physicists don’t seem to care much, and everybody is deeply involved in the lecture. The folks are coming from the Simons Center for Geometry and Physics in Stony Brook. For the whole month of August, the newly funded research institute is hosting a workshop on string theory. If you are someone in the physics community you have to pay a visit to this world-renowned conference. The superstar physicist of the week gets dragged to the beach to enlighten the crowd (and the passerby) on the most recent discoveries in the realm of quantum physics.

This week, Professor Anton Kapustin from Caltech is talking about his recent insights on electric-magnetic duality in three dimensions. This theory describes what happens when you exchange electric quantities with magnetic ones. Like, the magnet on your fridge with the electrons in the cathode ray tube in your old fashioned tv. It turns out that electromagnetism, in some situations, displays such puzzling duality and Professor Kapustin explained to us its supersymmetric version. The lectures are recorded and they are a must-see in the physics community.

After the two hours seminar, the scientists enjoy a free seafood lunch, courtesy of the Simons Center, and then spend the rest of the afternoon lying on the beach and having fun among the waves with the other local kids. In fact, they seem to enjoy body surfing so much more than the local teenagers. It’s their curiosity for an alien natural phenomenon, as most of them hardly leave their slate ivory towers to wander in the outside world…