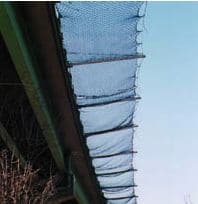 Cornell University is spearheading a campaign to install safety nets under three city bridges to save people from suicide jumps; the city responded basically saying, “Yeah we’re not a part of that.”

The Ithaca Journal covered a city council meeting where representatives repudiated preventative suicide measures, citing their own liability if someone hurt themselves: “The idea that someone could potentially break their neck (jumping into the net) and turn around and sue the city concerns me,” said Alderman Dan Cogan, D-5th. “I’m inclined not to support this unless Cornell would indemnify the city against lawsuits, costs, replacement. I’m not willing for the city to take on any costs for this.”

These cynics do have a point, given the rampant suing that goes on these days that cuts down liberal ideas before they’ve even had a chance to be implemented.  After all, once the public realizes that there are safety nets under bridges, those inclined to Cirque du Soleil acrobatics will probably jump, break a bone, then blame the city.  Why not hold the cushy college accountable, now that they’re all  we care about our student’s mental health and cuddly blah, blah, blah.  All those parents that sued them after students committed suicide taught them a lesson.  City council doesn’t need that affecting their budget, right?  And all the suicides come from emo college kids anyway.  Next they’ll be asking us to pay for helmets and wrap these dopes up in nets so they take ‘em to the loony bin!

To be accurate, Cornell was already planning on paying for the initial cost of installation; they were only petitioning the city to take care of future maintenance costs (the trash that inevitably accumulate and so on).  Mayor Carolyn Peterson at least seems inclined to at least entertain the idea of city involvement.

Then one alderman went ahead and gave jumpers the idea of going to another a bridge if they really serious: Alderman Eric Rosario, D-2nd, said Canadian research showed that suicide prevention nets increased the attractiveness of surrounding, unsecured bridges for would-be jumpers, and he said that made it likely that the Columbia Street footbridge could become a more popular jumping site if the nets are installed.

“If the Canadian study is right, we may just see jumpers going to that bridge,” he said.

Now, a little libertarianism is refreshing from time to time–leaving the individual to engage in any action he or she chooses without government interference– but is anyone compelled by politicians covering their own asses?  Such conservative disavowals appeal to those looking out for their own neck, but don’t underestimate humanitarianism.  Just ask the politicians that were against seat belts.