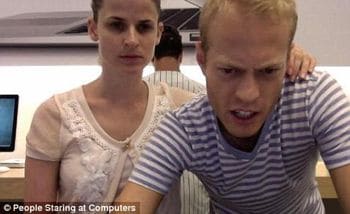 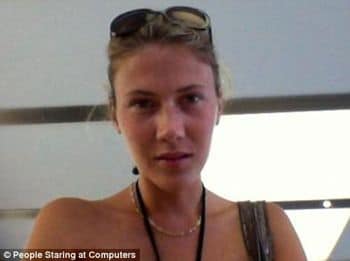 All Kyle McDonald wanted to do was create an art project where he could explore people’s relationships with computers. The only caveat being though was that the people being photographed (and later being downloaded onto a website) had absolutely no idea they were being photographed.

dailymail.co.uk: An artist who created a blog out of secret photographs of people looking at computers in Apple stores in New York is being investigated by the Secret Service.

Created by artist Kyle McDonald, it collects images taken surreptitiously from the built-in cameras in computers in the stores.

On the surface one could suffice that the project is legitimate. After all the store expressly gave Mr McDonald impression to install a programme inside the computers that took pictures. But according to the secret service they’re of the opinion that Mr McDonald’s project has violating computer fraud laws.

People Staring at Computers from Kyle McDonald on Vimeo.

washingtonpost: Within days (of a video exhibit of the photos being displayed at the Apple stores), the Secret Service, which investigates computer crimes, had raided McDonald’s house, seizing his two laptops, two flash drives and iPod.

But it seems the perceived crime has less to do with photographing people without their knowledge but more to do a section ‘18 USC section 1030‘ which pertains to fraud and related activity in connection with computers. In other words he might be in trouble for exceeding authorized access, something one could expect to apply to finance companies and entities that involve national security.

To date no charges have yet to be made, although Mr McDonald has been briefed that charges may well come as authorities study the content and deliberate. Electronic Frontier Foundation, a civil liberties site has taken to advising Mr McDonald about his rights.

In the end one has to wonder whether what one perceives as art or an attempt to explore boundaries can legally be sustained as legitimate expression or as a covert operation to undermine integrity within computer frameworks which on one level is what the art is all about, or rather has suddenly become.

Which is to say, should Mr McDonald be arrested he will by default perhaps have created one of the most remarkable pieces of art that he  could have never entirely envisaged…