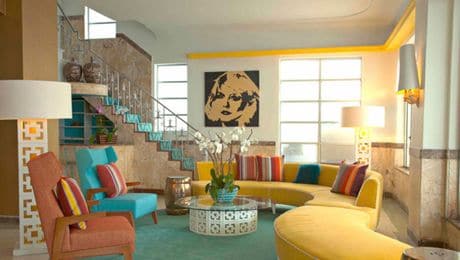 It was bound to happen. Gay night clubs, gay massage parlors, gay steam rooms, gay resorts (think Fire Island off New York’s Long Island peninsula) and now gay hotels. Which means, you should be digging deep into your wallet and getting out your credit card because you are about to finally experience what you’ve been aching waiting to experience all these years- your very own all inclusive gay hotel experience.

Called Lords, the gay man’s new outpost, courtesy of forward thinking Brian Gorman is conveniently located in the thick of South beach, Miami in a re splendid  art deco design. The choice colors? Bright yellow and acquamarine- cause nothing finally says you have arrived than those two colors right?

But in the event you are scratching your head and wondering how Mr Gorman got a hold of this idea, Mr Gorman would like you to understand he spend a lot of time watching you gay men and meticulously studying you before plunking down all that money (or at least getting someone else to plunk down that money). 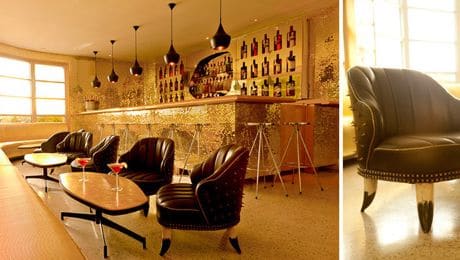 gawker: Having worked under real estate powerhouse Michael Shvo, he understood the importance of creating a strong product for a particular audience and did his market research, commissioning a survey of 20,000 gay Americans in his target cities (New York, L.A., Vegas, Miami, and San Francisco). Of those surveyed, more than 75% said that they would choose to stay at a gay property. “From there,” Gorman says, “we did a lot in creating a brand that would – yes, focus on that demographic – but it’s really about making anyone feel comfortable.

Brand. Hmm there is that word again. Who could imagine being gay could finally be branded? But what kind of brand you wonder? A cool one of course…

“We’re so cool that, like, if you want to walk into the lobby, you have to put on the sunglasses, instead of taking them off. What I wanted was a place where people would come and automatically be disarmed by the design.”

You have to put on the sunglasses as opposed to taking them off? Is that also going to mean that as a gay man you’re going to have to do 4 dozen bell curls before you nonchalantly walk into the lobby as well? Not to fear I’m sure there is an iron press dip station just before you walk through the revolving door. Seriously kids.

But once you arrive Mr Gorman ensures you it only keeps getting better:

“It was supposed to be something spirited, happy, playful but definitely well designed that a discerning gay audience would appreciate, and something different than they’ve seen before,” says Dan Mazzarini, who designed the 54-room hotel with his partner, Brian Humphrey. That “something different” includes unexpected touches like a glittery gold bar and a giant fake polar bear in the lobby, which has become a kind of mascot for the hotel. 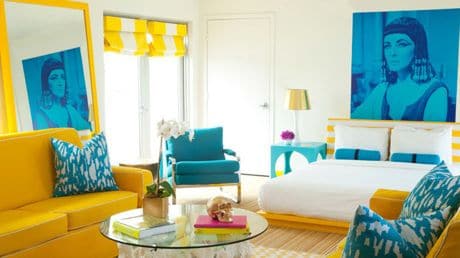 Let’s face it- this is a wet dream waiting to make its dusk appearance. But before we put on our