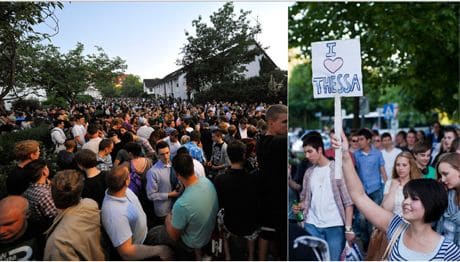 Are you one of those persons who like to invite people to their soirees via facebook and patiently watch as you wait to see who will turn up, who’s undecided and who will definitely turn up? Well Thessa, a 16 year old girl from Hamburg, Germany is, except when Thessa decided to send out an invitation to her upcoming birthday party she forgot to mark it as a private invitation. That of course is how more than 15 000 people confirmed that they too would be celebrating Thessa’s sweet 16 birthday with her….

Fortunately Thessa realizing she made a boo boo (isn’t that an affectionate way of saying dumb ass mistake?) opted out of her party and headed out to spend a day with her grandparents at an undisclosed location. That of course did not deter the revelers who eventually converged on Thessa’s front lawn. All 1500 of them that is.

And what a party it was…

Even though Thessa’s parents forced her to cancel the party (yes- the audacity!), put up notices that indeed the party was now cancelled, put the police on notice (100 ended up turning up), cordoning off the house and even hiring security guards, 1500 revelers decided to come out anyway. Because as you all know sweet 16 only comes around once in someone’s life.

Some revelers held up signs asking “Where is Thessa?” others brought birthday presents and homemade cake, there was lots of alcohol and the crowd chanted again and again, “Thessa, celebrating a birthday is not a crime,” — in obvious relation to the massive police presence, Bild reported.

Don’t you wish you were somehow in Hamburg this weekend? Never mind Thessa is eagerly making plans for her 17th, but who knows maybe this time she’ll see if her local council wont mind opening a couple of football fields for all the guests that are sure to drop by…