just before a prêt-a-porter show that I had to call Madonna, I thought that someone was playing a joke on me. But three days later, I asked if it was true and, to check, I called the number I was given. And it was her in person. She answered, “Hi, Gaultier.” Blonde Ambition tour was a real collaboration, friendship, and complicity. She was frightened of nothing, and our vision was in complete harmony and symbiosis.

HL: One of my all-time favorite JPG moments was when you brought out the kilt for men in 1985. What are some memorable runway experiences for you?

JPG: There are so many – I have been presenting shows for my house for 35 years, but let’s say that I still love my first couture in 1997, the défilé, “Chic Rabbis” or the “Tattoo.”

HL: You’ve often designed for film, from the The Fifth Element to La cité des enfants perdus. How does this process differ from designing ready-to-wear?

JPG: When I do my own shows, I am the director and I write the script. I decide on everything. When I work for the cinema, it is someone else who directs, and I try to do the designs in the function of what is asked of me. I have just returned to Paris from Cannes, where I attended the premiere of Pedro Almodóvar’s new film, The Skin I Live In. This is the third time that I have worked with Pedro, and I have enjoyed it very much. He is very precise: he knows exactly what he wants. I like to work in the cinema because it is always good to be able to express yourself in different ways.

HL: Carol and I grew up in suburban Southern California, and that has a lot to do with our view on fashion, this teenage mall culture. Does your upbringing in suburban Paris affect your outlook on style?

JPG: I learned through the magazines more than through my suburban experience. I used to buy all the magazines, look at the collections, and then do my own. And if Dior or Cardin had 300 outfits, I would have 310. I even wrote my own reviews.

HL: In your eyes, how has nightlife changed over the years? Are there still places you like to go?

JPG: Yes, but less and less.

HL: Trench coats, nautical stripes, lace, corsets, bombers, trompe-l’oeil. Each can easily be attributed to being popularized by your designs. How do you think your signatures have evolved over time?

JPG: I think it’s up to you to tell me. I have stayed true to my inspirations and there are always corsets or trench coats or navy stripes in my collections, but there is still so much to say.

HL: I personally own (and covet) a lot of Junior Gaultier, your younger, streetwear label from the late 80s/early 90s. Any chance you’ll revive the line?

JPG: I am working on a more casual line at the moment.

HL: You were absolutely hilarious on the BBC programEurotrash, which you hosted for four years in the 90s. Have you ever considered a career in comedy?

JPG: No, I am not a good actor at all. I am actually very shy, and doing Eurotrash for me was, in a way, putting my shyness to the test… 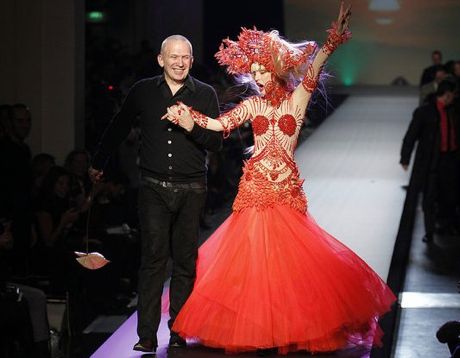