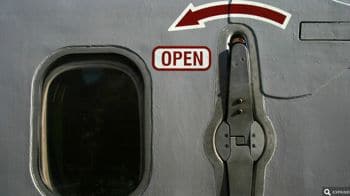 Have you ever been on a flight where some deluded passenger takes it upon himself to get up and open the airplane doors? Not often we bet, but one group of passengers had that thrill this afternoon on Continental flight no 546.

gawker: A “tall, burly” and “unruly” passenger on a Houston-to-Chicago Continental flight scared the shit out of his fellow passengers after trying to open one of the airplane’s front doors.

And how do you think that worked out?

What ended up happening was that the plane made an emergency landing in shrinking St. Louis, Missouri, and law enforcement took the man into custody. A Continental spokeswoman told the Chicago Tribune that there “was no indication that there was any terrorist threat”

And what were the reactions of fellow passengers to the unwinding of this unbelievable act?

“It felt very inevitable,” said Sara Olkon, who had just been reading articles in The New York Times about the death of Osama Bin Laden. “I started shaking and tears were coming out of my eyes. My heart was pounding through my chest.”

Shaking and crying. Hmm, to say the least that’s what one would call a turbulent flight. Talk about the threat of terrorism. Well at least terrorism of the deluded individual sort.

And what inspired the as of yet undisclosed man to attempt to open the doors midflight?

chicagotribune: “He said he had a rough Mother’s Day.”

And now so did another 200 odd passengers and air crew.

But just in case you’re thinking some other turd is going to now be inspired to try and open the airplane doors on your flight(yes kids- this could soon become a new trend amongst the discontent and mildly frustrated) here’s what one airline official Meryl Getline had to say on that issue:

usatoday: I’d like to reassure the traveling public that a passenger cannot open the door of a commercial airliner in flight. Why? For two reasons: First, cabin doors are generally “plug-type” doors. When closed, they are larger than the openings. You can push on a cabin door all you want, but it’s not going to go through the smaller opening.
[…]

The other [reason] is that once power is added-meaning the pilots have advanced the throttles after all the doors are shut and they’re starting to taxi-the cabin will start to pressurize.

Pressurization exerts a very strong force against the inside of the plane, sealing the doors shut and preventing them from being opened in flight. You can twist the handle and tug on it all you want, but it’s impossible for a human, or even several humans, to overcome this pressure. Still, it’s not recommended that you play with the door handle at any time as unauthorized tampering with aircraft equipment may result in arrest.

And as one individual found out first hand this afternoon, trying to open an airplane door mid flight will most certainly lead to your arrest.