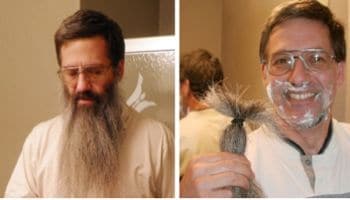 Every teacher dreams of that perfect “teachable moment.” The one time when they can rise above the malaise of daily lesson planning and transcend the classroom experience through real-life application. 10 years ago, one brave instructor saw his opportunity, and is now reaping the rewards.

FoxNews:  A middle school teacher vowed after the terrorist attacks on Sept. 11, 2001, that he would not shave his beard until Usama bin Laden was caught.

Weddle, who lives in East Wentchee and teaches in Ephrata [Wa.], had wanted to cut his beard for years. The gray stringy growth actually made him look a bit like bin Laden, the mastermind of the 9/11 attacks who was killed by U.S. forces.

Weddle showed his students exactly the type of dedication and sticktoitiveness they’ll need to carve out their niche in this ever-competitive world. Sure, he could have given up and shed the Rip Van Winkle look, but he forged on. He became a beacon of freedom by slowly transforming himself into a bin Laden clone.

“I wanted him to get rid of it, but it was his vow,” his wife Donita said. “I respected his passion and keeping a vow. I was willing to look past the beard because I love him.”

Not only did Mr. Weddle squeeze a decade out of his “teachable moment,” he’s also tapped in the fountain of youth. Given our obsession with looking young, how many people out there are considering this as a long-term plan for staving off the aging process?

Mr. Weddle is 51 now, soon to burn through his well-deserved 15 minutes of fame. His “teachable moment” has enriched us all. I ask that we live a little like Weddle from this point forward.

I’ll get us started by pledging not to bathe until I win a Pulitzer Prize.