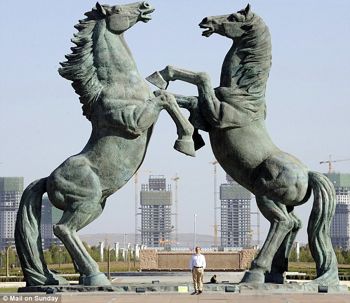 The Chinese strain: the rise of empty cities for missing millionaires.

It seems to have become the prevailing stasis of China’s ascent to world dominance that the many things that they once created, rather than being received by overwhelming demand and participation are now being increasingly received with the reality of a metaphorical silence of an empty pin drop thud. Thud, because newly created cities, meant for millions are just sitting there empty and solitary- so bare and vacant that the loudest things one can hear is that of a pin dropping to the dizzy asphalt. Should anyone be standing there in the first place to hear it that is…

More to the point, many Chinese aspirations are now being realized as an overblown speculative bubble inverted on its head where  the thing being imagined now just sit there like a silent mausoleum unto itself- a victim of its dizzy ascent and aspiration to the vortex of ever increasing Chinese consumption, which for the last ten years had been growing at a steady rate of 10% while world growth dissipated. 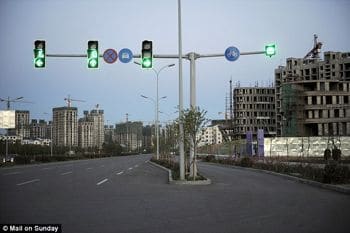 dailymailco.uk: So there is no joy in asking if China has outgrown its strength after ten years of blazing, enthralling growth. But it may have done so. The hedge-fund managers, those canny vultures of finance, are beginning to circle slowly, high overhead. They are starting to bet on the bursting of the Chinese bubble. These people did not become very rich indeed by guessing wrong.

And one of the reasons for their gloomy guesswork is here, in the strange, wistful landscape of Inner Mongolia, birthplace and home of Genghis Khan.

The city in question, Kangbashi, which serves to suggest that indeed China’s speculative boom might be now ready to take a vicious tumble reads like a distraught widow caught in a thunderstorm with nary an eye flicker to assuage her guilt, sense of longing or bereavement. 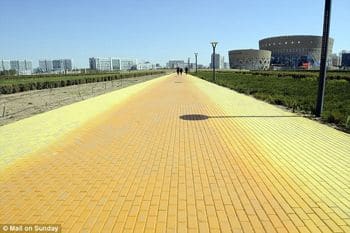 Seen from space, Kangbashi is a metropolis fit to hold a million busy, prosperous people, with sweeping boulevards, a spacious central square, homes, factories and offices spread over 12 square miles and a wide river running through it.

In its publicity, Kangbashi is a super-modern megalomaniac’s dream. There is a sculpture park containing dozens of abstract figures in faintly obscene embraces, standing for the unity of the people and the Chinese armed forces.

The whims of modern architects have been indulged, with a drum-shaped concert hall that looks much like a sawn-off cooling tower, and a leaning library built to resemble a shelf of books – next to a sort of giant cowpat coated in reflective bronze, perhaps symbolising Inner Mongolia’s dairy industry.

Seen from the new expressway which leads to it, it is a majestic line of towers in the haze. But at ground level there is something severely wrong. Traffic is slowed because a huge advertising hoarding has fallen from a bridge on to the carriageway. Like so much of modern China, sparkling at a distance, grubby and cracked close to, the reality does not quite live up to the appearance.

The reality does not fit up to the appearance? Isn’t this the precursor that so often precedes many a downfall of rollicky civilizations? Civilizations seduced by their own grandeur, stasis, might and impending glory to another dizzy height and achievement?

This was the deal, binding Communist Party, state, military and businessmen. The local government would build the roads, the schools and the infrastructure. The investors would bring the car factory (now working), the business headquarters and the rest. The police and the army would occupy major buildings.

Together, they planned to spend £1.7 billion on the theory that, if you build it, they will come. Wealthy Chinese would buy the apartments and the place would soon fill with people.

But the people to date have not come.

Some way from the rest of the aborted, futile township is an entire courthouse, surrounded by scrub and rough earth, its flagpoles empty, its crumbling steps adorned with stylised stone lions and its top storeys adorned with the (slightly uneven looking) scales of Chinese justice. But ghostliest and bleakest of all is an unused prison, watchtowers and all, waiting for convicts whose crimes will never be committed – because the place where they would have happened has never had any people in it.

How ironic that the thing that the Chinese prepare themselves for fails to materialize. Borne out of speculation and an iron will that the next upward revolution must come, whole communities have invested in these projects only to be left with the daunting reality that there is in fact no one left to buy into the great apparatus that officials insist they must buy into.

After all it’s one thing to buy the thing that one is told to have, but it is another thing not to enjoy it or make use of it after the sudden realization one barely has the appetite or the financial appetite/means to negotiate it. But this is so often the case of the speculator who chiefly buys not because they envisage themselves living in these swaths of cities but others.It is when the reality that the locals can not and do not want to live there that the chasm between reality and aspirations become most apparent. It is to be sure when one can hear the loud thud of a dropping pin in the empty city of Kangbashi.