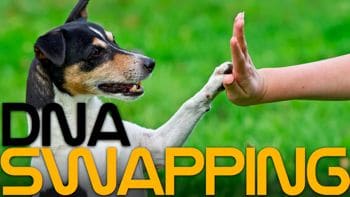 Mad science has arrived on your doorstep.

Dogs and humans are both susceptible to the delibitating disease Non- Hodgkin’s lymphoma. In 2010 alone, there were 65 000 cases in the US, with 20 000 deaths. Not great news or a survival rate. That said, scientists have decided in order to deal with this disease to come up with a clever method. What method you wonder? – What would happen if you could strip away at non associated genes outside of the human pool? And what other gene outside of the human pool suffers this disorder- your pooch licking your boot straps right now…

io9: Dogs also get non-Hodgkin’s lymphoma. They have long been subject to genetic selection, leaving extremely controlled test groups. A population of purebred dogs has a very limited number of genetic variation – far less variation than any human gene pool. Scientists took genetic samples from dogs with lymphoma, and rearranged their genes so that the dog DNA was sequenced as human DNA. Scientists then compared that DNA to the DNA of humans with lymphoma.

So after the sequencing and synthetic replication is complete how do results stack up?

Doctor Matthew Breen of North Carolina State University head the project and has this to say about the results:

physorg.com:  “In essence, we stripped the background noise from the human data. Lymphoma genomics is a lot more complex in human patients than in dog patients. This study tells us that while both humans and dogs have comparable disease at the clinical and cellular level, the genetic changes associated with the same cancers are much less complex in the dog. This suggests that maybe there is a lot of genetic noise in the human cancers that are not essential components of the process. While human studies have been looking in numerous places in the genome, the dog data indicate we need to focus on what’s shared, and these are very few regions.”

So in other words by studying the correlation of that between animals and humans, scientists are able to discern the most consistent patters of strains. Fine- but then the real question begins, what happens if it one day turns out that scientists can reverse the disease by tricking our bodies to accepting sterile dog dna? Will this cure work? Or can we then expect to experience ailments particular to dogs or interestingly welcome such ‘mad science’ as we approach the new millenium. And interistingly how many of us would accept this procedure knowing we were adopting foreign non human dna? Would you?