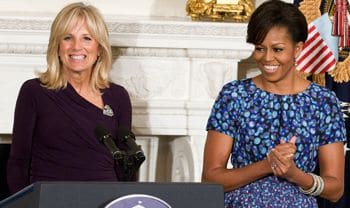 Another lapse at the control towers.

The gods must be with Michelle Obama and Jill Biden (our vice president’s wife) who Monday evening narrowly missed meeting their maker as the plane they were in had to suddenly pull out of their descending path to Washington. Which is fine we guess, but considering the increasing lapses with airport control towers that brought the near miss to play the question arises- when should we expect a disaster given the prevailing pattern of negligence?

washingtonpost: A White House plane carrying Michelle Obama came dangerously close to a 200-ton military cargo jet and had to abort its landing at Andrews Air Force Base on Monday as the result of an air traffic controller’s mistake, according to federal officials familiar with the incident.

Should we be concerned? This is what the FAA had to say, if you can believe it:

Officials with the Federal Aviation Administration confirmed Tuesday that the first lady was aboard the plane and said that “the aircraft were never in any danger.” The White House referred all questions to the FAA.

But if you want contradiction how about this:

The number of air traffic controller errors where planes come too close to each other have increased dramatically in the past year. They still account for only a tiny portion of all flights, and very few of the errors put passengers at risk. The FAA classified Monday’s error as an “A,” the most serious type.

Never in real danger but nevertheless deemed a type A scenario. One only has to wonder what the FAA deems an imminent disaster a whiskey away- A+?

They ordered the Obama plane to execute a series of S-turns in an effort to create a safe distance between it and the C-17, federal officials said. When those maneuvers failed to achieve the required distance between the two planes — and the Andrews controllers realized the cargo jet would not have time to get off the runway before the presidential plane arrived — they aborted the landing of the Obama plane and ordered it to circle the base.

Are you wondering like us what’s really going on here and whether what we’re getting to hear is a pr makeover to ease fears or conversely should we be wondering if this is just the media capitulating to hyperbole because the passengers inside were Mrs Obama and Mrs Biden?

What if the same thing had happened last night with someone other than these two? Would the media have scrapped the story? Or to put it another way, names and personas sitting in challenged planes aside- how often are the incidence of near misses and what does the FAA intend to do about it- or should we just discount it as one of the unappetizing risks of flying that every traveller must be willing to accept when they board a plane- even if that plane happens to be a US air force presidential plane?

Only time will tell…