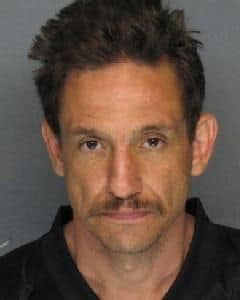 Shawn Batie wants to tell you about his memorable weekend.

Kids, it’s time to meet America’s most deranged conspicuous druggie of the weekend. How conscpicous was Shawn you wonder? Let’s all go grab a pair of fluroscent G strings, some toilet paper and find out…

kcra: LODI, Calif. — Lodi police arrested Shawn Batie, 42, at 9:41 p.m. on Friday night after they said he was found under the influence of methamphetamines.

Officers responded to a call in the area of Beckman Road just north of Harney Lane where a man later identified as Batie was found standing in the dirt next to the cemetery with a flashlight, yelling in the dark.

Police said that Batie was wearing an Oakland Raiders jacket, a g-string and a hair scrunchie around his genitals. He was also wearing socks.

Well at least Shawn was wearing socks. Hmm- we’re definetely intrigued to wonder what color Shawn’s socks were? Did they have holes in them, did they match, or was Shawn at one stage using them to stoke the good stuff in that pipe of his?

Officers said that he was very jittery and his pupils were dilated. They took him into custody on suspicion of being under the influence, which was later confirmed at the jail where it was discovered that he was also a parolee at-large, police said.

While en route to the jail, officers said that Batie became very uncooperative. When asked why he wasn’t wearing pants, police said that he insisted that “they must have been taken.”

Police said once at the jail, Batie proceeded to smear his feces on the walls.

Hopefully it was at this stage that Shawn’s socks became useful.