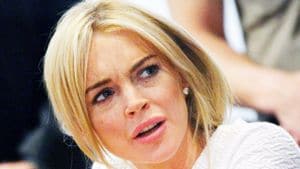 Them tears are rolling down Lilo’s eyes now

Here’s a role that should go someway in sobering our collective mess- Lindsay Lohan: 120 hours of community service at the LA morgue.

people: The actress, 24, will be picking up trash, emptying trash bins, mopping floors and cleaning windows and restrooms at the L.A. County Department of Coroner’s facility.

Personally I’d be afraid if it was me that was dead who had to deal with Lilo sweeping a broom around my sorry ass. I’d beckon the angels of Galilee and a bottle of Kool Aid and watch from the corner as fate tempted her with every brush stroke. But that’s just me.

In addition to a four-month jail term, Lohan was also ordered Friday to complete 360 hours of service at the Downtown Women’s Center, a homeless shelter located in L.A.’s Skid Row.

Kids, let’s be honest, isn’t this the role you always wondered Lilo wanted to play all along?