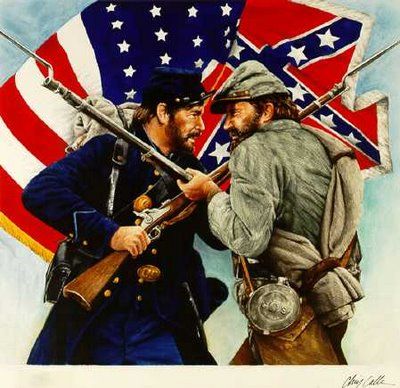 Today, on its sesquicentennial anniversary, let’s all set aside a brief moment to reflect on the American Civil war. Let’s ponder an America without this historic turning point, then quickly shift focus to a lighter subject, so as not to darken the day.

Considering their irreconcilable differences on a basic human rights issue, it was of surprise to none that the Confederates and Union waged war. Diplomacy was checked at the door and 700,000 casualties later, we stood as a slavery-free country– at least legally.

In a world where opposing viewpoints coexist and slam together like colliding particles, it’s a wonder we don’t see more conflict; more war among civilians. Sure, there are countless civil wars going on around the world at this very moment, but I’m talking about right here in the Land of the Free.

The untrained eye may see peace and harmony (or maybe that would be the blind eye), but a closer look will unearth the type of disagreement that leads to only one thing– war.

Here are the three groups, within these States of Unity, that are most likely to lock horns in conflict, after existing in relative harmony for far too long.

The exponential growth of technology has widened the traditional gap between generations. Grandpa is still licking his index finger before turning the page of his jaundiced copy of Moby Dick, while his slick little grandson tornadoes through the world’s information on his Ipad 2.

Newspapers are well on their way to permanent extinction due to the informational access provided by our hero’s of tech. This will anger paper mache aficionados, grumpy old men and newspaper editors alike, and may even incite a rush of violence against their attention deficient foes.

Does the edge go to the New Media for their networking/organizational ability, or to the Old Media for their untapped rage created by their utter disgust for what the world has become?

Working 40 standard hours– plus 10 of OT at time and a half– to earn what one CEO makes in a minute can certainly create a divide. Much of the anger will be coming from those wearing collars of blue, but the bosses are equally frustrated after years of fiscal sob stories and unwarranted promotion requests from their beat-up-Timberland wearing foot soldiers.

As Civil War Commander-in-chief Abrahan Lincoln once proclaimed, “A house divided against itself cannot stand.” Considering this country is split down the middle on almost every topic of note, I think it’s safe to say we’re divided. Abe isn’t a name like Nostradamus, so we take his foreboding words with a grain of salt, but should we be salting this a bit more?

We call ourselves the United States, but the unity aspect is under review. The inflexible nature of the donkeys and elephants has brought us dangerously close to a  government shutdown. Violent rhetoric reigns supreme as we debate whether gays should be allowed to wed. We continue to divide and weaken as lesser countries close the once-considered-insurmountable gap.

I ask that we give peace a chance before dropping the gloves over any of these issues. Sure, we have our differences, but in the end, a civil society cannot exist  without civility. Buy your gramps an ipod shuffle, give your janitor a real tie, and put a flower in the gun of your Republican friend’s 38– do not let history repeat itself dear readers.