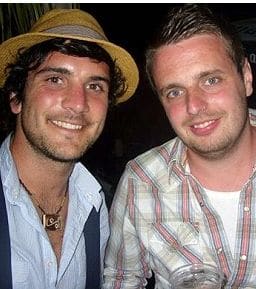 A question of being in the wrong place at the wrong time?

telegraph.co.uk: James Cooper, 25, and James Kouzaris, 24, were in Florida when they were killed at 3am in a gangland area rarely visited by tourists.

They apparently accepted a lift from someone they met in a bar, thinking they were being driven home.

A 16 year-old, named locally as Shawn Tyson, was charged with their murder. It emerged yesterday that he was freed by a judge last week despite being arrested over an armed robbery.

Police sources said both men were running away when they were shot. Their bodies were found 50ft apart. They still had money on them and police found no evidence to suggest they had been wanting to buy drugs.

Which begs the immediate question- why did the two accept the entreaties of someone they didn’t know?  And didn’t they realize as they were being driven that where they were being taken hardly matched that of a resort?

express.co.uk: It hard not to speculate why two men would visit this dangerous area. It not only is spoken of as the lowest of the low, but it looks like it. Did they not catch on? Were they so drunk that they did not notice their surroundings? The police are reported to be dumbfounded. They take triple reinforcements when they venture into the area where these 2 Brits found themselves – and the police are well-armed, ut not well eough to satisfy their security concerns. This was gangland that these naive men found themselves in and at a time when the gangs “own” the streets.

Ultimately we’re left with the senseless death of two young men who had bright futures and the incaretation of an even younger individual who must of thought by partaking in this gangland killing they would find acceptance, and their own way into the world, the same way the two men thought when they earlier arrived in Florida that week they would be finding paradise and escape from the British wetlands- only to find grief in more treacherous wetlands…