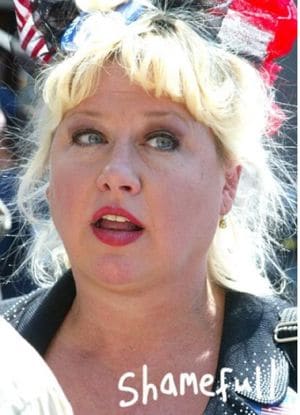 In one of her recent WorldNetDaily articles, Victoria Jackson simultaneously slams gays, Muslims, and the hit show Glee in one fowl swoop. The article dripping with venom, satirizes Muslim women and castrates the producers of Glee for portraying homosexuality in a positive light, potentially turning their young audience gay:

“This new al-Qaida magazine for women has beauty tips and suicide-bomber tips! Gimme a break! That is as ridiculous as two men kissing on the mouth! … Did you see “Glee” this week? Sickening! And, besides shoving the gay thing down our throats, they made a mockery of Christians – again! I wonder what their agenda is? Hey, producers of “Glee” – what’s your agenda? One-way tolerance?”

Following inevitable backlash from this article, Jackson trotted over to CNN to appear on Headline News’ “Showbiz Tonight” to discuss her rant. In an all too familiar attempt to legitimize obvious hatred, Jackson took to the Bible as the ultimate trump card in debates such as this.

Huffington Post: “With the opportunity to clarify her thoughts, Jackson deferred to her interpretation of the Bible: “Well, it doesn’t matter what I think,” Jackson said. “What matters is what the Bible says. And I’m really concerned about our country because immorality is, well, let’s see: secular humanism rules the airwaves, and it’s stealing the innocence away from this whole generation of children. My daughter is a teenager and I cant find any show that she can watch.”

Whether we share religious views or not, free-minded individuals will view statements like Jackson’s as being reflective of hate. That being said, the question remains: does Jackson’s hate stem from her firm beliefs in The Word, or is it a form of manipulating her faith into a rationale of sorts for her innate hatred for certain lifestyles?

If Jackson’s hatred for these impurities stem from her belief in the Bible, then should she not hate everything associated with Bible-deemed impurities? Even if this hate is to be cast on all women during that time of the month (check it out for yourself in Leviticus 15:19-20) Hate one, hate all I say, because if you don’t, you cast guilt on yourself as being a “selective believer” – manipulating scriptures to suit your agenda has become the new norm it seems….