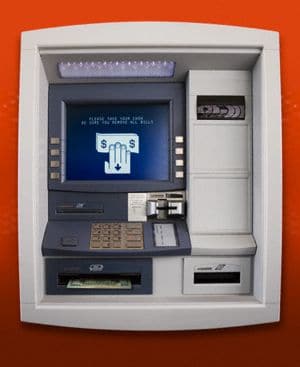 Shouldn’t you help your local bank keep their coffers full too?

With banks forced to give up large profits that have now been outlawed courtesy of the fed agencies with respect to overdraft fees and debit cards (this author can personally attest to a number of times he was charged a $35 fee by Chase on more than one occasion by going into overdraft arrears less than $5) banks are now scurrying for new ways to siphon money into their coffers. Their new idea- the $5 ATM fee that they are hoping to stick on you.

gothamist: J.P. Morgan Chase & Co., TD Bank Financial Group, and PNC Financial Services Group have already started testing out the increased fees in other states; it now costs $5 in Illinois and $4 in Texas for people who use a Chase ATM and aren’t a bank customer.

$5 to take out money that belongs to you? Never mind the $3 fee that many banks have been able to stick to date on ATM users who use their ATM card outside of their home bank.

“If you have to find revenue somewhere, increasing this surcharge [on noncustomers] is the least unpleasant way of doing it,” said Tony Hayes, a partner in the banking practice of Oliver Wyman. And more increases are expected to come: some banks are increasing charges for checking accounts, and TD Bank recently dropped its policy of letting its customers use other ATMs for free, and now charges $2 a pop. Some are comparing these changes to the airline industry, “which is building its business on fees for checked bags, peanuts and other little “perks” the public used to take for granted.”

Perks that one used to take for granted? Since when did having something that intuitively sounds part of the servicing one would expect of their financial institution now become considered a perk. Next thing you know there will be a $3 fee every time you walk into your local branch for the ‘inconvenience’ of having to tend to one of your banking functions- of course that will be a perk that the banking industry will somehow sell us on too.

But then again, you the consumer still have a choice- just don’t use those ATMs that aren’t your home bank, even if in reality you will so often find yourself doing so because the likelihood of your home branch existing on some street corner at the dead of night is just that- a remote chance.

Aren’t you glad your local bank is industrious when it comes to finding ways to fatten its bottom line?