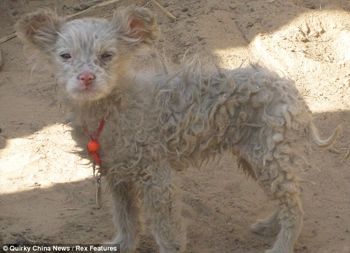 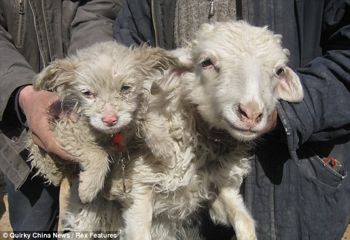 Ewe have got to be kidding….

What to believe? That said we might as well try to sort this story out and see where it all takes us….

dailymailco.uk: Vets say it’s impossible – but to Chinese farmer Liu Naiying his birth is a miracle.

For Mr Liu insists one of his sheep has given birth to a dog. The ‘puppy’ has wool like a lamb but its mouth, nose, eyes, paws and tail look more like a dog’s.

Like us you’re probably wondering how can this possibly be possible? After all when was the last time a cow gave birth to a dog, let alone a sheep? Nevertheless Liu Naiying’s sleepy village has suddenly come alive…

The birth has prompted thousands to flock to his farm in Shaanxi Province to see for themselves. Mr Liu told how he found the unusual baby animal shortly after it was born in one of his fields.

‘I was herding the sheep, and saw a sheep licking her newborn lamb on the grassland. The lamb was still wet,’ he said.

‘When I went up close to check on the lamb I was shocked because it looked so weird, like a cross between a sheep and a dog.

But just in case you’re now thinking of buying a couple of sheep and putting them near the pet dog, (trust us- we’ve read stranger things…) a local researcher has come up with an idea that seems to make a lot of sense:

‘It’s not possible that a sheep could become pregnant with a puppy,’ he said. ‘It’s likely that this is just an abnormal lamb.’

Aren’t you glad you keep the sheep and the pet dog in your back yard at arm’s length….?