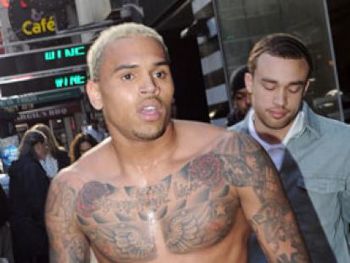 Did you notice any shards of glass on 43rd and Broadway this morning?

Following the gritty interrogation of priceless bad ass Chris Brown at the hands of Good Morning America this morning our collective hero has this afternoon managed to once again make headlines pursuant to his stormy exit off set that saw dressing room alumni, TV hosts and innocent pedestrians swallow mounds of air in open horror.

Unable to conceal his disdain for being reminded of his violent past, Brown chose the obvious choice of once again resorting to violence and tantrums that first saw him rise to prominence and the preferred flavor of truant girl scouts. So much for proving he was once and for all over his ‘anger issues.’ But where there is a TV screen and a twitter account more high jinks drama are set to follow.

Gawker.com : “After the rage, he tweeted, “I’m so over people bringing this past shit up!!! Yet we praise Charlie sheen and other celebs for there bullshit,” only to delete it moments later. At some point in the midst of this, Chris ripped his shirt off and exited the building with his nipples showing and tongue out”

One day some time in the distant future Chris Brown and Coco Sheen will run into each other at an undisclosed motel bar lounge, Charlie will at first aim to calm the frenzied rapper with a blast of his crack pipe while the rapper will stand there screaming at some thing in his imagination. Eventually they will look at each other before crying profusely into each other’s arms, wondering out aloud how in any other country in the world they would have been pushed off a high cliff but here in the docks of good and plenty get to live the preferred lifestyle of immortal action heros…

WHY MUST RIHANNA HAVE TO PROVE HERSELF? SOCIETY GOES ON DOUBLE STANDARD ALERT.

RIHANNA AND CHRIS BROWN RE UNITE? WHY DO WE CARE?