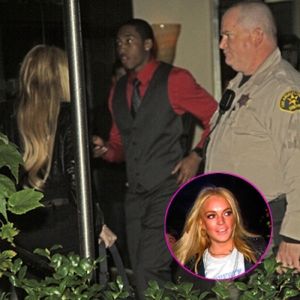 The party favors are starting to stop. Oh the tears.

How ironic that the queen of party favors and demeanor is now suddenly finding herself being denied entry into a scene that she once used to cavort and essentially own to reckless abandon. Which makes us wonder- is tinseltown finally over with its love relationship  with Lilo and has the threat of impending jail for shoplifting (not the most glamorous crime to be associated with as opposed to say drink driving or narcotics possession- which seems to get a backdoor wink in Hollywood) squarely put America’s wild child into permanent purgatory?

radaronline: Lindsay Lohan was turned away from a private party in Hollywood late Friday night, RadarOnline.com can report.

The troubled starlet may not be drinking but that doesn’t mean she doesn’t want to be out partying with pals and Friday night was no different.

Except this time she was denied entrance at the door, an eyewitness tells us.

The bash was at the Sunset Marquis Hotel in West Hollywood, which advertises itself as the place to “indulge your inner celebrity.”

Kids, I don’t know about you, but me and the chipmunks are savagely looking through our blackbooks for a private party that our friend Lilo has a chance of possibly being let into. To date, Vladimir – the elder of the two chipmunks has been able to secure Lilo a guest appearance at a senior’s club in Boca Raton, Florida– where for the special price of $8.99 she’ll get to have all night access to the buffet (of course grog is extra- but never mind, we all know Lilo quit that years ago, right?)

Lohan was cool about the brush off though and  avoided making a scene although the situation was clearly embarrassing, the source says.

She left immediately through the garage.

One day deep into the future Lilo will be sitting under a decaying Copacabana tree jiggling her posterior as the DJ plays the oldie favorites of a bygone era, a freshly minted glass of fizzy water keeping the lumps of desperation from seeping to the top.