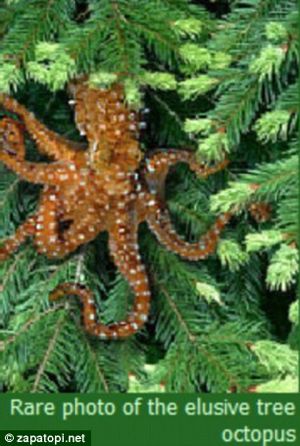 “If I say something is true enough times, can I eventually get you to believe it’s true?”

University of Connecticut Professor Donald Leu recently set about testing the critical abilities of his young students by inviting them to research the ‘elusive’ Tree Octopus of the Pacific Northwest — a creature which he ‘claimed’ “uses its suckers to move along tree branches in a form of ‘locomotion’” called ‘tentaculation’ “and steals eggs from the nests of birds[,]” but has become endangered due to its being hunted  by wealthy fashionistas as a hat ornament.

The Daily Mail: “[Leu] fabricated the endangered Pacific Northwest tree octopus and set up its own website containing details of the creature in order to test students’ ability to evaluate information they find online.”

Needless to say, octopuses can only survive in the ocean. The fact that not one of them challenged this assertion points at the way inter active media affects cognitive functioning.

According to Leu, students were completely incapable of telling fact from fiction and “not only believed all of the fabricated information, but also insisted on the existence of the octopus, even when researchers explained all the information had been made up.” Which, in many ways, sound quite like the way we communicate. Any one pay attention to the news lately?

There is, however, a fittingly poetic end to this postmodern tale of trickery and truth seeking. Netizens will now find themselves greeted with the following message upon visiting the tree octopus website:

A recent article in the Daily Mail contains incorrect information about this site. This site was not created by or for Professor Donald Leu or the University of Connecticut. It was created in 1998 by and copyrighted to me, Lyle Zapato. I and my site have no connection with him or his institution. Professor Leu merely found my site one day and decided to use it as part of his axe-grinding against the good people of the Internet. Also, the images taken from this site included in the Daily Mail article are not copyrighted by the U of C as marked. Furthermore, I won’t deign to correct the scurrilous accusations against the defenseless tree octopus made by Professor Leu and repeated in the article. Needless to say, they are lies.

The potentially postmodern question is: could the ‘digital immigrants’ be even more out of touch than they think? Given the fact that this story is from the Daily Mail, we’re just not sure who to trust.

Needless to say we’re wondering when the next story about polar bears that escaped their Arctic terrain and now live in a deserted desert island off the equator makes its way….?