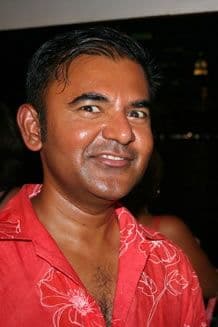 How much trouble would you go through to be part of society?

Priyantha DeSilva has been making the rounds for some time now, attending bon vivant events on the guise that he too was a socialite, film maker, financier or what ever one likes to hear one announce they are when they turn up to said events. Turning up, but unlike the other guests- he wasn’t exactly behaving himself in the most cordial way. A type of behavior which finally saw him get arrested this recent Wednesday.

nypost: Notorious New York party crasher Priyantha DeSilva was arrested Wednesday night after years of posing as a fashion editor or film director to talk his way into society events and allegedly paying for auction items with fake credit cards.

Law-enforcement sources confirmed that DeSilva, also known as Silva, was booked at the 19th Precinct on charges of fourth-degree grand larceny and possession of a forged instrument for showing up uninvited at a charity gala at the Harold Pratt House in November — and stealing a $1,500 Prada bag.

As we said, not the most exemplary behavior for someone who portends to be a socialite or wishes to congregate amongst them.

But with the expanding definitions of what now counts as a ‘socialite’ should we  be surprised that someone like Silva finally comes along and blatantly play their hand? Which begs some deeper questions- what does it mean to be a socialite anymore and what in the face of increasing media attention does it take to actually  to pass as one?

Or better put is it enough to be welcomed as a socialite if one has their picture in certain journals taken enough times- therefore assuming the guise of one, but not necessarily the inherent disposition of one as countenanced by supposed good breeding, education, familial connections and philathropic contributions to society? Or do these things no longer matter, especially if one makes it to page 6 or PMC or other venues that take the time to accommodate such entreaties? Venues that are perceived to be the arbiters of what passes for society…

DeSilva has been reported to have impersonated Condé Nast fashion editors and producers of the movie “Crash” to gain access to events stretching back to 2006. A warrant was already out for his arrest in Southampton, stemming from an August 2009 incident in which he was cited for urinating in public on Meadow Lane.

Urinating in public? Well – that is not particularly beguiling behavior is it?(Even if this author confesses he has on some occasions actually done the same thing, but at least was cognizant enough to do it in a back alley… decorum is always a must). Especially when you do it on the front lawn of the patron committee’s residence. But then again perhaps that was DeSilva’s round about way of letting the world know how he really felt about socialites- despite his insistence as being perceived accepted as one.

DeSilva’s most recent intrusion was at the American Antiques gala preview at the Metropolitan Pavilion. Page Six reported on Sunday that he was bounced from the event after he fell asleep on a table while big names, including Martha Stewart and Citigroup Chairman Dick Parsons, mingled nearby.

Mmmh. How odd? I was at the same event, and actually was approached by Mr Silva himself who offered his hand upon noticing me. I must have stood there sheepishly confused as to how he ended up being invited to this event, but shook his hand anyway, amused that he was still up to his old tricks. Amused and wondering if anyone else besides me had noticed the impostor and less than garrulous individual. Amused and perplexed as to how he was still being tolerated and allowed to congregate amongst the guests in front of me. Curious to wonder if anyone  really cared anymore…

As it turns out people still care and wonder….

DeSilva was arraigned in Manhattan Criminal Court. Bail was set at $7,500. His lawyer, Philip Rauch, had no comment.

Shouldn’t you become a socialite too, in the event you’re not one already?