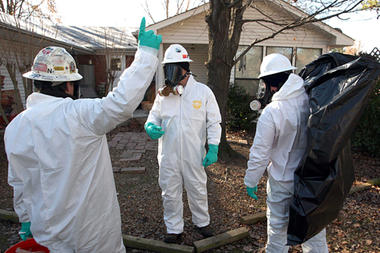 Doomsday thrill-seekers and skeptical naysayers alike excitedly slaved away for hours yesterday,  pounding their keyboards in glossolalic fits of furious fact checking and CAPS LOCK COMMENTING as Web searches for anything related to the ‘dead fish and birds’ disaster (and this is how Examiner Oddities blogger Jim Hegarty knowingly put it) exploded.

Tasked with making sense of this endless barrage facts reading like fiction, and fiction – in a properly uncanny turn – sounding stranger than what usually passes for truth, we’ve decided to satisfy your morbid fascination and whet your thirst for self-destructive entertainment by presenting our favorite reports, our favorite strings of fiction (hopefully) posing as facts.

To begin with, start hyperventilating – ’cause the top article currently trending on Before it’s News, everyone’s favorite Fortean paranoid hangout, boasts the following headline: ‘10,000s of Birds Dead in Manitoba.’ Oddly enough, there was no exclamation mark.

Sourced back to Scarletwhore, perhaps the ‘truthy’ underbelly of the internet’s most wildly criticized hoax pusher, the copy read as follows:

Officials from Health Canada are scrambling to deal with the sudden death of 10’s of thousands of wild birds somewhere in the province. Officials dodged local reporters who were removed from outside the Level-4 Canada Science center. Thisis is the first time in the history of the Level-4 facility that a full mobilization has been initiated.

Just what kind of mobilization was made and upon whose part was not noted, no officials were named and no pictures were presented, but a Globe and Mail article from back on the 24th of November which detailed how all 8,200 turkeys on the farm in the Rural Municipality of Rockwood [in Manitoba] will be destroyed as a precaution against an outbreak of bird flu, was cited. Below, commenters discussed whether BP was responsible because, and I’m quoting, ‘EVERYTHING IS RELATED !!!’

But no worries, only 37% of Before its News reader believe the article to be anything more than fiction. So when you come out of hiding, just remember that that counts for something.

Another article, which is far less believable but much more imaginative, titled ‘Is HAARP About To Open The Sixth Seal’ argued that the bird and fish deaths, which occurred near a HAARP base and in one of the most heavily chemtrail sprayed locations on the planet were an early warning sign that HAARP has been activated. This because of a plan to ‘destabilize’ the Caribbean tectonic plate system, which is connected to the Mid-Continental US’s New Madrid fault line and the Great Lakes…

Of course, Once you destabilized the Gulf of Mexico sea floor (already done) and then caused a massive rupture of the New Madrid zone, you would then be able to trigger the movement of the Caribbean plate. The movement of the plate would be towards the East. It would slip from the sea of the Gulf of Mexico all the way up to The Great Lakes region. It would generally run along the path of the New Madrid fault and the Mississippi River.

Once the Caribbean plate had fully repositioned itself, the Mississippi River would then be about 100 miles wide in diameter and it would be emptied and flowing backwards in many places. The Great Lakes would also be disturbed from their banks and would begin to spill out and empty towards the south. They would flood all the way down to the Gulf Of Mexico with a tsunami that would dwarf the 2004 Indonesian tsunami. (See ya, Cleveland.)

All of which makes particularly horrifying kind sense, even if none of it can be verified.

But fear not intrepid truth seekers, because WikiLeaks will indeed come to the rescue. Even more dubious ‘news’ sites, like the EU Times , are busily reporting that Julian Assange, the pervert antichrist, is soon to release cables concerning a war between the USA and UFOs hiding in their secret base ‘on or near the Continent of Antarctica.’

In any event, we’d all better hide, because even though these bloggers may just be trying to make a quick buck save journalism (both appropriately impossible), there’s probably no clearer sign that we’re all going to die.

Now dead birds are falling out of Louisiana.

What caused 4000 red winged blackbirds to plummet to their death?