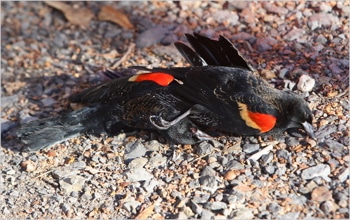 Is nature trying to tell us something?

Now dead birds are falling out of Louisiana.

On the surface it appears rather bizarre that this past weekend in a town north east of Little Rock Arkansas a migration of red winged blackbirds fell out of the sky to their death. To date no adequate explanation has been offered as to what actually happened, nevertheless, pundits, journalists and a few naturalists are all speculating how this happened and what this actually portends.

Keith Stephens, a spokesman for the Arkansas Game and Fish Commission had this to say:

nytimes: For now, state officials are speculating that the birds may have died as a result of stress, startled by fireworks in the area, or perhaps by lightning. But, Mr. Stephens acknowledged that the cause may never be known.

It is, he said, the biggest case like this that he is aware of.

But the case now gets even more compelling when one takes into consideration the 83 000 fish that died a few days earlier in the western part of the state.

One thing is almost certain: the bird drop is not related to the 83,000 fish that died a few days earlier in the western part of the state, the biggest fish kill in Arkansas that anyone can remember.

Which has us immediately wondering who is to say that the two instances are or are not directly related, but nevertheless disturbing in that a large group of creatures can be whitewashed out of the sky or water. And what does this suggest about mankind’s ability to equally withstand internal or exogenous shocks that come and go? After all if birds and fish that have been around for millions and millions of years are coming to peril how are we as humans to withstand an unlikely series of humans suddenly falling dead whilst walking down the sidewalk?

Maybe it’s nature trying to tell us something or then again maybe it’s just a series of unrelated but nevertheless compelling events.