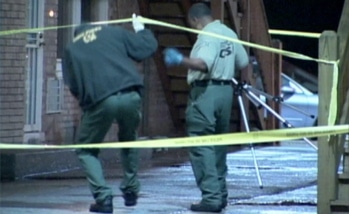 The increasingly uncanny Ronni Chasen mystery has grown even more movie-like following a development yesterday evening in which a man, described as a suspect, shot himself in the head with a pistol when police showed up with a search warrant at his Hollywood apartment .

Unnamed sources allegedly told the LA Times that the man, who lived at the Harvey Apartments on Santa Monica Boulevard, had been under surveillance ‘for some time.’ Though believed to be connected to the crime, no one yet is sure how ‘exactly,’ or from what he felt so much fear that suicide seemed his only viable option. Of course, that those particular details have died along with him only adds to their already arousing curiosity.

The incident, despite being still very hush-hush and on the QT, was recounted by these sources as follows: When police approached the man at the lobby of the apartment complex, he backed up and refused their orders to raise his hands. He then pulled out a pistol and shot himself in the head, the sources said. He was declared dead at at the scene. Which is more details than the Beverly Hills police are giving as, they say, the investigation is still ongoing.

The intrigue only compounds when one of the locals, going by the name of Bob comments on the LA Times: The Harvey Apartments are a dump. Everyone inside has some kind of outstanding warrant and is wanted for something. It could be death by mistaken suicide. He thought they wanted him for some other murder that he did.

Isn’t this a seedy scene straight out of Chinatown? And hasn’t the way we relate to this story become more like the experience of awe we feel when engrossed in the middle of a movie than the hushed tones of reverence and angry polemics that usually accompany such a brutal tragedy?

In a way it’s what all contemporary news aspires to be. The ’truth’ in the form of endlessly compelling fantasy.