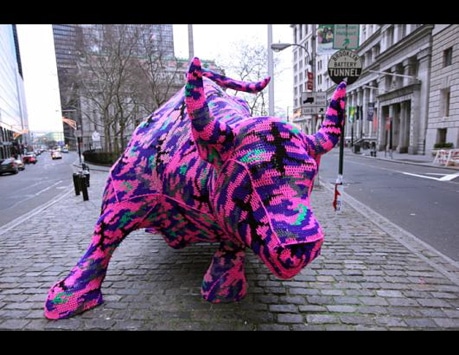 This article comes courtesy of Steven Kaplan, art correspondent, publisher and noted critic and friend of Scallywag. The original article can be found below and in the following 3 sources, sources that I would our readers to get to know:

December 27, 2010. On Christmas night, in the freezing cold before the blizzard hit New York City, crochet artist Olek and her band of enablers managed to fully clothe the famous bronze statue of a bull that stands in Bowling Green Park in downtown Manhattan. A potent symbol of Wall Street capitalism, the bull wore its crocheted “cozy” for two hours before the caretaker of the small triangular park arrived and confiscated the work, cutting it up and depositing it in the garbage. But first this photo was taken.

With her obsessive strategy of multicolored yarn – purple, fuschia and orange predominate – sewn up in camouflage-like patterns, Olek seems to combine the Sherwin Williams Paint “cover the earth” mandate with a desire to be the Christo of crochet. She has previously fully dressed a bicycle, an automobile and various performers in her trademark coverings, in choreographed conceptual pieces executed on the streets of New York and Miami. In her one person show this past fall at Christopher Henry Gallery at 127 Elizabeth Street in the Chinatown/LES neighborhood, she created a room-sized installation in which every domestic object, from bathtubs to tables and chairs to telephones to X-rated samplers with texts derived from Internet chat rooms, was given the full Olek treatment. The show was called “Knitting is for Pus****” (as in “Pussies”). Paper Magazine did a photo shoot during the run of the installation, which included live performers inhabiting the room, as described in a review taken from Verbicide:

The first thing one sees in the gallery is a miniature studio apartment — nay, an average-sized studio by New York standards — covered in