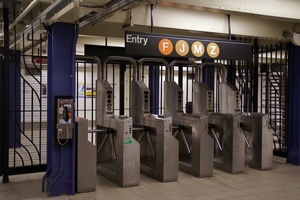 Isn’t it time you spend 2 weeks in jail for jumping the turnstiles?

Out of the NY Times today comes a disturbing story of a new trend that hopefully you will get to side step, assuming you have money for the bail or a lawyer…

NYT: Thousands of people arrested on low-level crimes in New York City spend days languishing in jail, not because they have been found guilty but because they are too poor to post bail, according to a report to be released on Friday.

The report, which examines the bail conditions for people charged with non felonies like smoking marijuana in public, jumping a subway turnstile or shoplifting, found that the overwhelming majority of defendants in cases in which bail was set at $1,000 or less were unable to pay and were sent to jail, where they remained, on average, for more than two weeks.

Is this making you choke at the chaffe? So jumping the turnstiles, while agreeably still a crime and which has you saving $2.25 has the punishment cool factor of possibly getting you two weeks behind the scenes time, because you can’t come up with bail- which reminds us of the old saying – the law was really created by the rich for the rich- which is to say how often do rich people need to have to jump turnstiles?

Human Rights Watch, an advocacy group that most often focuses on abuses abroad, obtained data on nonfelony defendants arrested in the city in 2008. In more than three-quarters of the 117,064 cases, defendants were released on their own recognizance.

In 19,137 cases from that year, bail was set at $1,000 or less. The report found that 87 percent of the defendants in those cases did not post bail and went to jail to await trial. They remained for an average of 15.7 days.

“Here we are locking people up for want of a couple of hundred dollars,” said Jamie Fellner, senior counsel with the domestic program of the advocacy group.

“Pretrial liberty should not be conditioned on the size of your bank account,” Ms. Fellner said.

Is Ms Fellner being naive or hopelessly optimistic? As polite as society likes to be, it is stacked against those who don’t have access to resources and any incursions against the law will see those persons paying disproportionate penalties whilst others who commit crimes are sometimes let off the hook for fear having a record will hurt their chances of getting professional work.

But of course it only gets better…

The report raised the possibility that many of the poorer defendants pleaded guilty at arraignment for sentences with no jail time, simply to avoid being behind bars while awaiting trial.

“The client is placed with a choice of staying out of jail and being on Rikers Island and fighting their case,” said Robin Steinberg, the director of the Bronx Defenders, a nonprofit group that provides legal representation to Bronx residents charged with crimes. “Almost anybody would plead guilty. It creates a pressure on poor people in the criminal justice system for them to plead guilty without regard to whether they were guilty or not guilty.”

A criminal record or a couple of weeks at your favorite hotel room at Rikers? At this point does it really matter, your integrity is essentially up for sale, assuming you are innocent, and perhaps even if you are not.