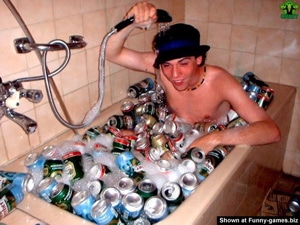 Self defeating tricks that will eventually get you arrested.

Here’s a story that even we are finding too hard to believe but on reflection, makes perverse sense….

Police spotted the driver at Box Hill at about 8.25pm (AEDT) yesterday.

“This was nothing unusual except police attention was drawn to the vehicle as the driver was tooting his horn and waving at police as he drove past,” they said in a statement.

Honking and waving because it was Christmas and he wanted to share his love for the festive season with the local police department. Or could we be even more Freudian and assume that subconsciously our ‘hero’ knew he was somehow misbehaving mass gravitas and thus at least found the impetus to get himself to close proximity to authorities who if they had their wits about them would eventually come to investigate the exceptionally festive behavior of our hero.

The man driving the car was pulled over and breath tested, recording a blood/alcohol reading of .278.

Considering the legal blood alcohol driving level in Victoria, Australia is .05 (can anyone be surprised that our hero hadn’t gone the extra distance and at least put on a Santa suit whilst gesticulating to the patrons of Melbourne) this is akin to our hero effectively driving a NASA space shuttle to Mars and back.

The man had his licence withdrawn immediately and will face court at a later date.

One day when our hero is knocking back a few drinks at the local pub he will think and reflect on the day he became a national hero and world stage antidote to sanity. Merry Xmas indeed!