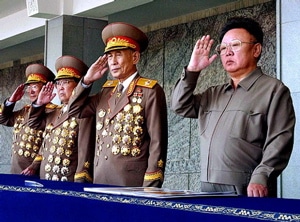 Is it really a cry just for help or something more?

UK Telegraph: The Pyongyang regime fired 50 heavy artillery shells on to an island off South Korea’s northwest coast, killing two marines, injuring 17 and three civilians, and setting the homes of 60 civilians on fire.

The South responded by firing 80 shells back into North Korea and scrambling F-16 fighter jets to protect its airspace.

In a day of rising tensions, South Korea said that its troops would safeguard its territory with “stern responses” if the Pyongyang launched any further attacks. However, it said would not “escalate” the conflict on the Peninsula.

Not escalate the tensions unless it sees how far North Korea continues, whether it’s bluff (the preferred outcome) is called and importantly to see how far the US will go this time into appeasing North Korea which seemingly wants to have access to nuclear arms but the resources to sustain itself that it is unable to secure. Classic behavior of strong arm antics.

The US, which has nearly 30,000 troops stationed in South Korea, last night said it had moved no additional personnel or equipment to the area as a result of the attack and that it was “premature” to say whether there would be a response or increase its deterrent there.

Robert Gibbs, the White House spokesman, said the administration was in close and continuing contact. “The United States is firmly committed to the defence of our ally, the Republic of Korea, and to the maintenance of regional peace and stability.”

In other words the US is committed to maintaining the status quo and getting what it can in conjunction with South Korea as the North has over 50 years been increasingly stymied and Russia been unable to offer the same depth of commitment as in past years.

Analysts said that the artillery attack, which came eight months after the North had torpedoed a South Korean warship killing 46 sailors, was yet another calculated attempt by the regime to exploit divisions and extract concessions from the international community. It is keen to resume six party talks with South Korea, Japan, the US, Russia and China to secure a generous aid package in return for concessions over it’s nuclear weapons programme.

It also comes as the ailing North Korean leader, Kim Jong-il, seeks to reassure the country as his son Kim Jong-un prepares to take over.

At present the West can only lightly tread as the stalemate condition plays out, but one thing is for certain, North Korea is feeling the pangs of desire and restraint and is willing to play Washington’s bluff – of course the question is will Washington play into it or will concessions be made? Either way, equity markets across the globe tanked, a side effect that hasn’t been overlooked by both North Korea or the US for that matter. Happy hunting or endgame…