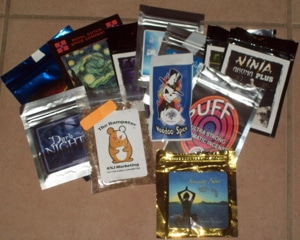 When the fake high is potentially more threatening than the real high.

In a sign that the nation, or rather the Drug Enforcement Administration (DEA) is enforcing zero tolerance of products that get you ‘off,’ today the DEA announced that it is moving to get the sale of 5 chemicals often used to replicate the type of high you would normally get from marijuana off the market. Which begs the question, what suddenly changed?

aolnews.com The ban on the synthetic pot ingredients will go into effect in 30 days, the DEA said in a statement. The chemicals are JWH-018, JWH-073, JWH-200, CP-47,497 and cannabicyclohexanol.

Synthetic pot is made by spraying plant material with chemicals that mimic the mind-altering high of THC, the active ingredient in marijuana. Many of these chemicals have never been approved for human consumption.

“Makers of these harmful products mislead their customers into thinking that ‘fake pot’ is a harmless alternative to illegal drugs, but that is not the case,” DEA Acting Administrator Michele Leonhart said.

Misled? Really, who’s really been doing the misleading? The DEA which aims to take drugs off the street despite the ever increasing amounts of it at any corner you look hard enough for, the pharmaceuticals that keep creating more drugs for certain ailments that have convinced the public that at least taking synthetic opiates like Oxycontin is a wiser and healthier choice (never mind the side effects of those drugs) or the drug dealers themselves who are also cutting their drugs in the hopes of squeezing more profits?

There has been a string of cases of people becoming ill after trying synthetic pot brands such as K2, Spice, Blaze and Red X Dawn. The products are easily bought online or in head shops, and they even have YouTube video ads.

But this synthetic high comes at a price.

“You’re basically playing Russian roulette with these chemicals,” Gary Boggs, a special agent with the DEA, told ABC News. “Hallucination, increased heart rate, increased blood pressure … these chemicals appear to bind to certain parts of the brain, so the potential for long-term effects are very deadly.”

There has also been a string of cases of people getting very sick (and even dying) taking street drugs, pharmaceutical drugs and even eating food that is overloaded with gunk, calories, saturated fats, sugars, cholesterol. In fact last time we checked the super markets were stocked to the brim with those products. Shouldn’t we be going after those products too?

The fake pot ingredients will be banned for at least one year while the DEA and Department of Health and Human Services assess whether they should institute a permanent ban.

Which frankly, mightn’t be a bad idea, but what’s a bad idea is not addressing the other 98 percent of things that have already demonstrated real negative effects in our society…