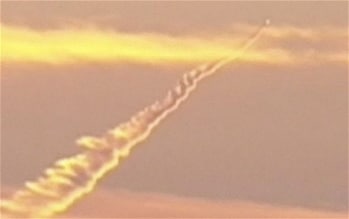 At current press, ‘authorities’ have yet to have been able to identify who fired a large missile that was seen leaving a large trajectory in it wake off the coast of South California. All of which has the Pentagon up in arms and we imagine and quite a few people who happen to live in the state of California…

UK Telegraph: What appeared to be a large missile was seen shooting into the air about 35 miles west of Los Angeles and leaving a long vapour trail, or contrail, over the Pacific Ocean.

The US Navy, Air Force, and other military organisations are examining video of the event captured from a passing news helicopter.

Colonel Dave Lapan, a Pentagon spokesman, said: “Nobody within the Department of Defence that we’ve reached out to has been able to explain what this contrail is, where it came from.

Surely not the most reassuring report one could receive, especially if you happen to live in the periphery of where the missile was fired from.

CNN: One man, John Pike, a defense expert who is the director of GlobalSecurity.org, told CNN that he believes the ‘missile’ is a contrail (the visible vapor trail seen behind airplanes and rockets).

“It’s clearly an airplane contrail,” Pike said Tuesday afternoon. “It’s an optical illusion that looks like it’s going up, whereas in reality it’s going towards the camera. The tip of the contrail is moving far too slowly to be a rocket. When it’s illuminated by the sunset, you can see hundreds of miles of it … all the way to the horizon.

Optical illusion? There seem to be a few illusions going on….

Nowpublic: One other official told CNN that it the effect could be from a contrail and that it could be an illusion it was rising straight up, but there has been no official statement released to the media and the public.

“The FAA ran radar replays of a large area west of Los Angeles based on media reports of the possible missile launch at approximately 5 p.m. (PT) on Monday. The radar replays did not reveal any fast moving, unidentified targets in that area,” said FAA spokesman Ian Gregor. “The FAA did not receive reports … of unusual sightings from pilots who were flying in the area on Monday afternoon.

We may not ever get a real explanation of what happened Monday afternoon, but that of course doesn’t discount the fact the talking heads will remain vigilant in giving us the most plausible ‘proper’ explanation, an illusion greater than the illusion that came to pass over the skies of the Californian coast.