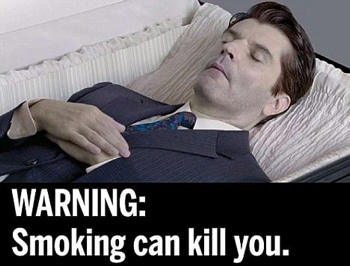 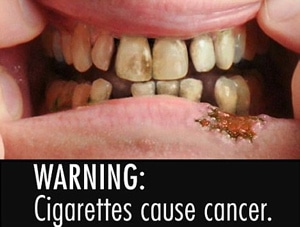 As if the $12 per-pack price tag in Manhattan weren’t deterrent enough, by 2012 officials from the US Food and Drug Administration are hoping to pass legislation that requires all cigarette containers to be branded with ‘striking’ images of “Diseased lungs, dead bodies, a man on a ventilator and mothers blowing smoke in their children’s faces.”

While a June 2009 law which put Big Tobacco under the watchful eyes of the FDA already mandates that up to a full half cigarette packaging be covered with  black-and-white warning statements, now the plan is for lurid images to be used on top of that.

The FDA, which “will accept comments on its proposal until January 9,” may well be appealing to the very same trace of the death drive that tobacco addiction already attaches itself to by inviting consumers to help decide which images they’d best like to be assaulted by for the remainder of their lives as they puff their daily pack.

Reports The Daily Mail , “The agency will select the final labels in June after reviews of scientific literature, public comments, and results from an 18,000-person study. Cigarette makers will then have 15 months to start using the new labels.”

Despite applause from anti-tobacco advocates and the macabre FDA’s excitement, reactions seem at best divided on how effective the warning labels will be, no matter how gruesome they are. 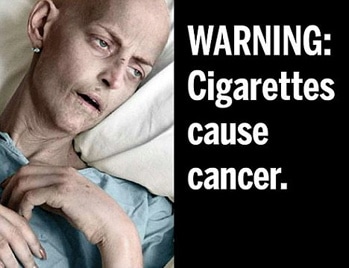 But isn’t that the point of using images to begin with: to evoke an instantaneous emotional reaction rather than use words which can only create  an introspective and much more tempered one? Which, we could say, is exactly the task of propaganda – to bypass such trivialities as thinking and play directly upon our emotions. 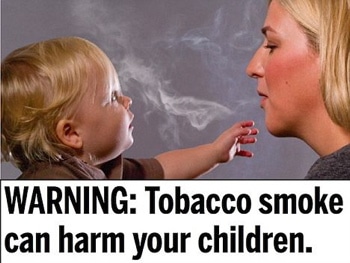